Still riding the high of all the recent good news we headed to Indianapolis for the marathon and my 30th birthday. I had decided during the summer to celebrate my birthday by running a marathon. I knew I wanted something substantial for my 30th, and given how important running has become in my life I figured it was a perfect opportunity. It was a risk of course, marathons can go terribly wrong (like much of my first), but it also gave me unique motivation. 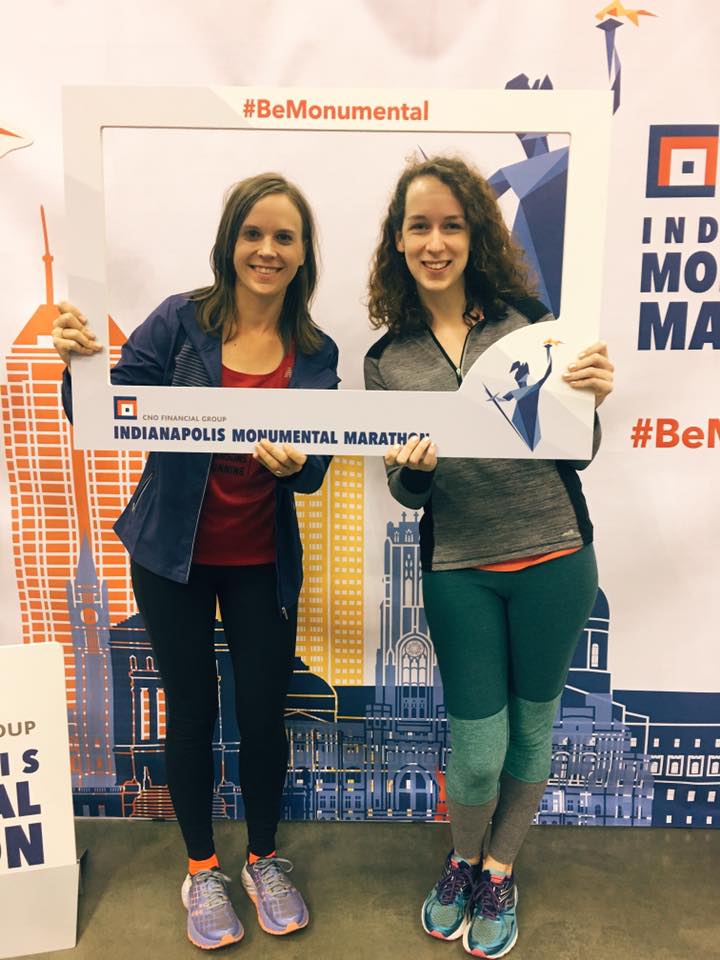 On my birthday a few of us drove up to get settled and pick up our packets. Caitlin was running the half and we decided to share an airbnb (Alex would be arriving late that night). It was wonderful to have a close friend to explore the expo, nervously chat about the next day, and eat birthday cupcakes with. We talked a lot about how quickly this day came. Marathons sneak up on you. You train for 12-20 weeks and it always feels so far away, until suddenly, it isn’t. My training went pretty well, not as well as the first time in terms of hitting all my paces/workouts-I blame the heat on this. For most of my training I was just trying to survive running in 90% humidity in the 80’s. So I didn’t know what my paces would be when the temperatures came down. I hoped all the heat training would pay off, but the summer didn’t relent until about three weeks before race day. So it was a bit of a guess as to what my body was capable of. I did put in a lot of milage though, 750 miles over 16 weeks. So I had a lot of confidence in my base. I’m still a full believer in the higher milage teachings of Hansons Marathon Method and will continue training with them for the foreseeable future. I was a less nervous this time too, perhaps a 7 on a scale of 1-10 instead of 9. But there’s nothing like knowing the pain of a marathon is ahead of you to make it difficult to sleep.

I woke up feeling ready, strong, and calmer than I would have expected. After a mild panic trying to find my pacer I stood in the cold, dark corral waiting to start. And then, we went. Miles 1-8 flew by and I felt strong, but wary. Last time I started hurting almost immediately and by mile 8 hit my first “wall” (I was simultaneously ill-prepared and overtrained). So as I passed mile 8 with everything going smoothly I felt some relief. By the half point I was shocked I was still holding on with the pacers. Though, we were also running under-pace which can be a terrible mistake and I worried I would bonk at any moment. The mild rolling hills at mile 16-18 slowed me down a bit and the milage started to hurt. I backed off a bit, and let my body run what it could. By mile 20 I knew I was about to enter the pain tunnel. It was hard as hell, but I felt stronger than I could have hoped. Alex found me at mile 23, exactly where I needed him. Mile 23 is brutal. You have about a 5k left and you are so ready to be done, but 5k isn’t anywhere near done. It’s a lifetime. That last mile it took everything I had not to walk it in, no because I didn’t feel strong-I was shocked that I did, but I also hurt more than I knew possible. Everything blurred from my focus, it was just my breathing and the road I could see in front of me. At 4:07 I crossed the finish line. A massive PR, one I was never confident I was going to hit. I left absolutely everything on the course, and that’s all I could do. One year ago in November I ran my first race, a 10k. And over the next year I’d work my way up to running two marathons, four halfs, and a handful of mid-distances races. But none of those races felt as incredible as this marathon. I immediately knew I’d run another, stronger, faster one and couldn’t wait. I cried several times walking back to the apartment. I was proud, drained, hurting, and ecstatic. It was everything I wanted from a marathon. A perfect start to a new decade. I dedicated it to my awkward 13-year old self who, like many girls, felt painfully inadequate. During the race I kept her in my thoughts, telling her “just you wait, one day you’ll run marathons.”

I still remember talking to Alex about marathons, long before I ever wanted to run one (or really, run at all). I thought it was so absurd what people put themselves through. And lets be honest, marathons are brutal. The training is arguably the hardest part of it, it completely takes over your life. And the pain on race day, oh the pain. No one is pretending marathons are good for your health. Want to do that? Run for an hour a day most days and you’ll max out your health benefits. No, marathon training and racing is this arguably insane act we put ourselves through, essentially to prove to ourselves we can do it. To continue to challenge ourselves with increasingly harder tasks. To suffer, on purpose. Because when you suffer at your own hands, the suffering you feel out in the world feels a lot less terrible. You feel a lot stronger. But marathons are special. I love them for many personal reasons. But I also love the community, runners are incredible humans and it’s this great, inclusive sport. And during a marathon? You witness the full spectrum of humanity. You watch people achieve things they never though possible, you watch others completely break themselves down. You witness determination you hope you’d exhibit if the time came. You see runners lift each other up and carry each other. You witness raw elation and extreme suffering. Every type of person is represented at the marathon. It’s one of the most inspiring places you can be. If you ever need to feel faith restored in humanity, run or watch a marathon. It’s difficult to explain, but there’s this incredible energy in the air, you feel acutely alive. In those hours nothing else exists in the world. You’re in flow. It’s a similar feeling I get when I’m thousands of miles away in a completely foreign country, in transit. Whether a train, bus, kayak or my own legs, it’s simply this flow of movement where your mind is quite and your senses heightened. You’re removed from the noise of your regular life, whether because you are physically removed from the familiar, or because you’re pushing your body and mind to a place it rarely visits. It’s an addictive sense of peace. A meditation, really. Running is one of the greatest things to ever enter my life, it’s granted me strength, friendship, community, health, and overall wellbeing. The marathon to me, is a celebration of all of these things.

And that, was Indy. What a weekend. I’m so glad I decided to spend my 30th in this way, it was certainly memorable. Next up I’m going to focus on mid-distance races up to the half marathon to get my speed up before I tackle another full. Because when I come back to it? I want to be gunning down a 3:30 and an illusive BQ. I know it’ll take time, but I can’t wait to continue this journey.