Japan wasn’t a country that’s been high on our list of “must visits,” more mid-tier, but when you only have a week (in March), live in San Francisco, and don’t feel like a beach vacation your options (internationally) are fairly limited. But with Tokyo a mere 10 hour flight away (and only 8 back!), the promise of delicious food, and easy travel we were sold.

We opted for Airbnbs as they are plentiful, clean, and cheap in Tokyo. While one day we might opt for a stay in the Hyatt in Tokyo, it cost us the same as one night there to fund our entire accommodations for the week. And they were great properties. We decided against any tours and planned our days how we might in New York (the two cities share a remarkable amount in common). Essentially, we picked a neighborhood, some food, the “things to see” in each and wandered around for three days.

Arrival. Tokyo is, as you might expect, extraordinarily efficient. Upon landing we were able to pick up sim cards for data (an absolute must at $10/day as wifi is spotty and english not a guarantee). From there we purchased our train tickets to the city and our metro passes loaded up with enough for a few days (also key as the city is giant and the subway cheap, far reaching and very efficient). From there we headed to Tokyo Station to grab dinner on Ramen Street. We spotted the shop with the longest line and joined. We got our first experience with the ramen vending machine, where you pre-pay and select what you want from a machine and then get a ticket to hand to the chef. The menu had no English but the internet clued us in on what to do. We may have been delirious from travel, but that tuskemen ramen was incredible. And would end up being our favorite of the trip. Japan has the reputation that you can just pop into most places and their food will be better than anything you can get stateside. We never really tested this theory as researching where to eat was easy enough (thanks data!) and enabled us to have some fantastic food experiences. 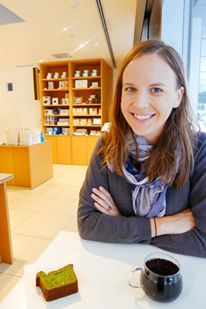 The next day we woke up way too early thanks to jet lag. We wanted coffee and immediately discovered that getting coffee (or food) before 10AM would prove difficult. This was explained as most people commute, so they don’t get coffee until they get into work. But, of course Blue Bottle was open and rescued our need for caffeine. Japanese and American consumer and food culture has a huge amount of cross over. Blue Bottle was just the beginning. There were some not so surprising ones (like Japanese based 45r, Muji and Ippudo, or most major fast food franchises) to slightly more surprising like Fred Segal (with a Portland based Blue Star Donut) or Beard Papa in Harajuku. We would of course, prefer to drink more locally (and would, later) but with the option of caffeine or no caffeine it was an easy decision. Also of note, the menu was exactly the same. We opted for the Shinjuku branch since that’s the neighborhood we stayed in, and planned our ventures from there. 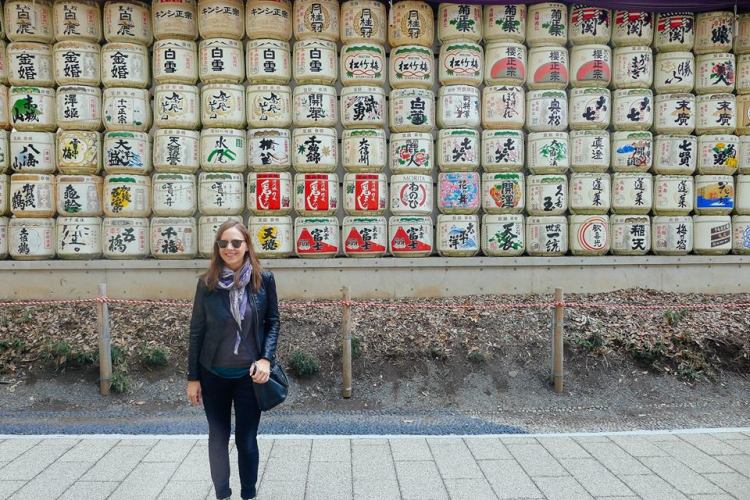 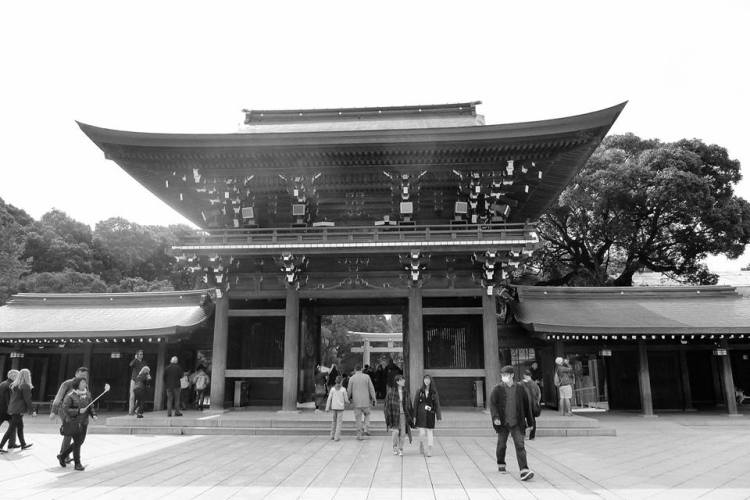 Next we walked south to the Meiji Shrine and gardens. It’s a great expanse of a park right in the center of the city (much like central park) its an excellent respite from the city. During Cherry Blossom season I would imagine it’s even more beautiful (we missed this by two weeks apparently!).

Since we were next to Harajuku at this point we wandered there. We walked down to main drag, which was just as packed and chaotic (and young, and hip) as expected. We saw a multitude of people carrying these giant cotton candy cones, so naturally had to get one. They were too absurd not to.

Also in Harajuku is a branch of the ever popular Afuri Ramen. We of course, stopped here for lunch. As one can never have too much ramen. 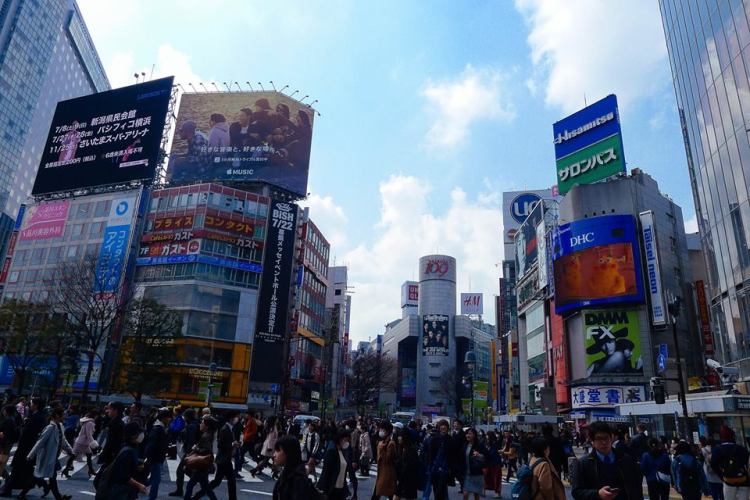 En route to Shimokitazawa neighborhood (which we read was the “Williamsburg of Tokyo, though not to be confused with the “Brooklyn of Tokyo”-more on that later) we stopped to watch the Shibuya Crossing, the largest pedestrian crossing in the world. It was impressive, though I’d imagine more so at night with the overload of neon lights. Of note, we never were up late enough to explore night life. 10+ miles a day of walking plus jet lag meant dinner was our last stop each night. 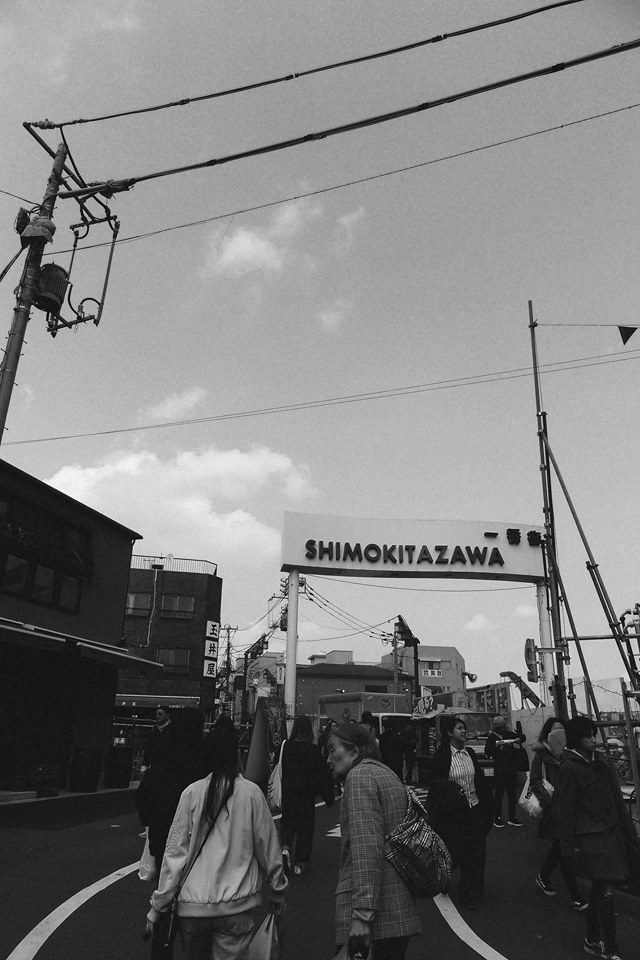 In Shimokitazawa, a few subway stops from the chaotic Shibuya its a whole different Tokyo. The buildings are a few stories high, the streets more crammed with bikes and pedestrians than cars. It’s not large, so we didn’t spend a lot of time there, though we did wander, visit Fog Linen Works, and most importantly the famed Bear Pond Espresso. We read the owner was surly and had no time for any questions so we decided to order two “dirtys.” To stay, of course, though there is almost nowhere to sit we snagged a few stools as two people left. This is top notch coffee. It is milk, espresso, milk. And yet it tasted like nothing we’ve had before. Cool, creamy, delicious. This place earns its accolades.

We wandered home happy (and tired) for a rest before dinner, which would involved eating Tonkatsu nearby and wandering the basement food floor of a department store trying not to consume everything in sight. High-end food halls in Tokyo are their own attraction. In particular for the “perfect” fruit. They don’t look real, they are so pristine. It’s also about $80 for a watermelon. So we opted just to observe the fruit, instead of buying them.  We did pick up a few things, and enjoyed the perk of anything cold being wrapped up with a mini icepack. Because why not?

And that ended the first half of our time in Tokyo!