It isn’t as if we didn’t know Dubrovnik might not be an enjoyable city. When researching Croatia we read that a lot of people disliked it. But, that’s also what we heard about Bangkok, a city we loved. Plus, it’s technically still shoulder season, so we figured why not? It’s a good thing we had two full days though, otherwise we would have left hating the city. But with a little effort avoiding the crowds generated by the cruise ships can redeem this city. It’s a shame though, it’s gorgeous here, but the mass tourism is absolutely out of control. Just google image “crowds in Dubrovnik.” It’s upsetting. 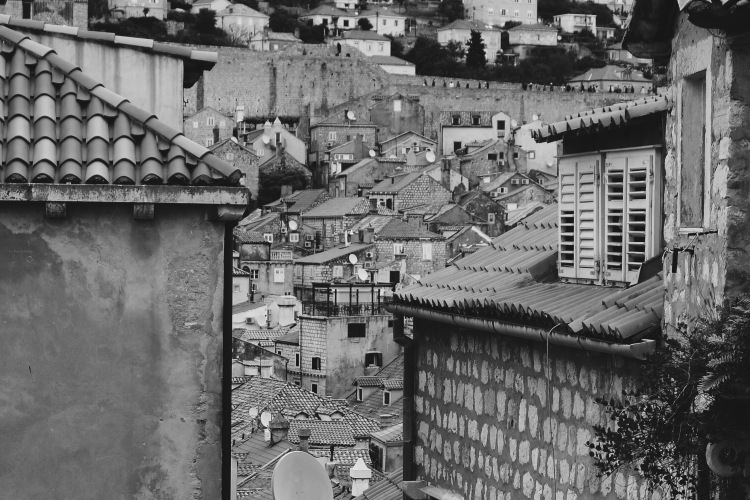 Our first taste of the city was an evening run through Lapad. We were both still tired from our trip from Tel Aviv, plus the slow meandering, unmoving tourists made for a less than enjoyable run. But we did get a quick tour of the harbour and some gorgeous sea views.

Our first full day it was raining on and off, though never enough to be a problem. We left our apartment and wandered where everyone else does, the old city. We were greeted by crowds, and tour information desks. And people dressed up for Game of Thrones tours. It  was immediately awful. There is nothing worse than not being able to walk, stuck in a crowd when all you want is a coffee to wake up. We found a cafe that was meant to have good coffee, saw the prices, and immediately left. A few blocks off the main drag the prices dropped by 50%. 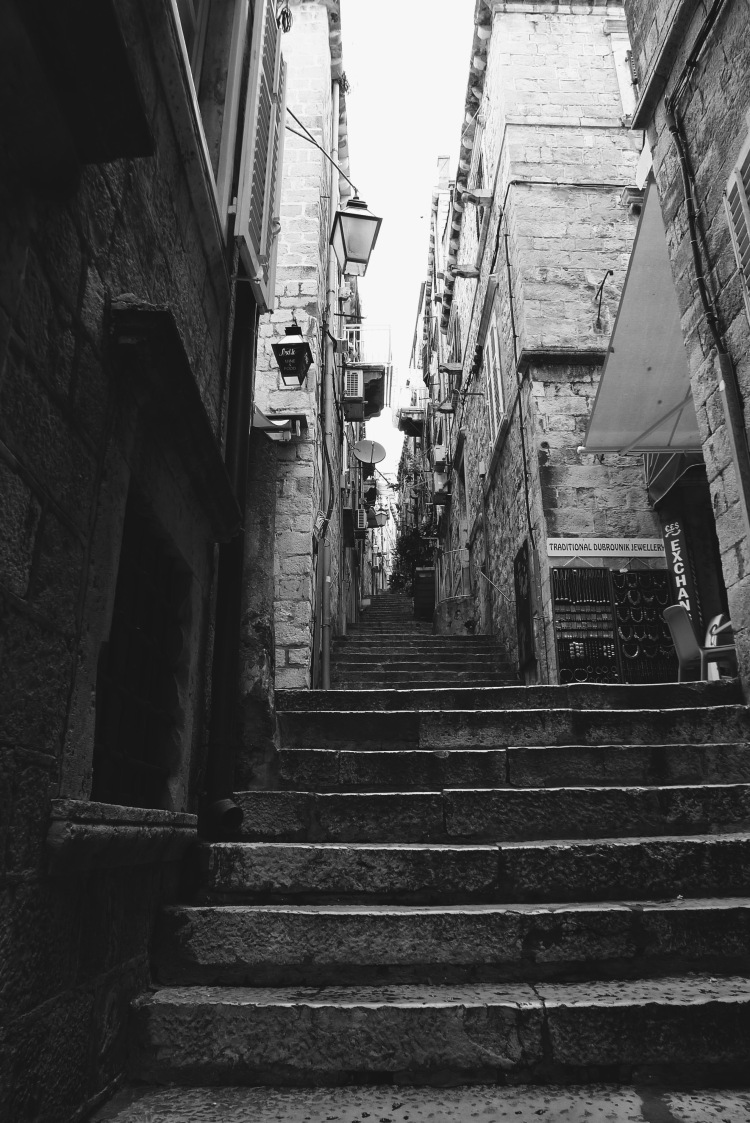 If you go to Dubrovnik everyone says to walk the walls. You pay an absurd ticket price of nearly $20 to walk around the old city walls in a congested line of other sweaty tourists for 2k, we passed. A quick wander around the outskirts and you get equally as impressive views, minus the cost and crowds. We also just missed a local race where you can run the walls, that I could get behind. Throughly disappointed by the city, we used the day to do more practical things, like all of our laundry, go to the grocery store, and figure out how to get to our next destination. On a nearly six-week trip having one city be a bust is hardly problematic, though we hate wasting our time.
A lot of people we met had negative feelings too, which is ironic, we’re all complaining about the problem we’re contributing to. Though, honestly if they just limited the absurd number of cruise ships things would greatly improve. Once they leave in the evenings the city gets tolerable again. Not great, but better.

We thought about going on a day trip to get out of the city, but ultimately didn’t want to spend four hours on a bus. So instead we headed for the flattest portion of the city by the cruise ship landing and got some speed work in, startling tourists and finding other runners in search for somewhere flat and uncrowded to run. After, we grabbed lunch to go and headed for the mountain. Another $20 would get you a cable car ticket to take you up. Or, you can hike it. Obviously we walked. The guide books suggested it would take 90 minutes, it took 35. And the views were well worth the effort. 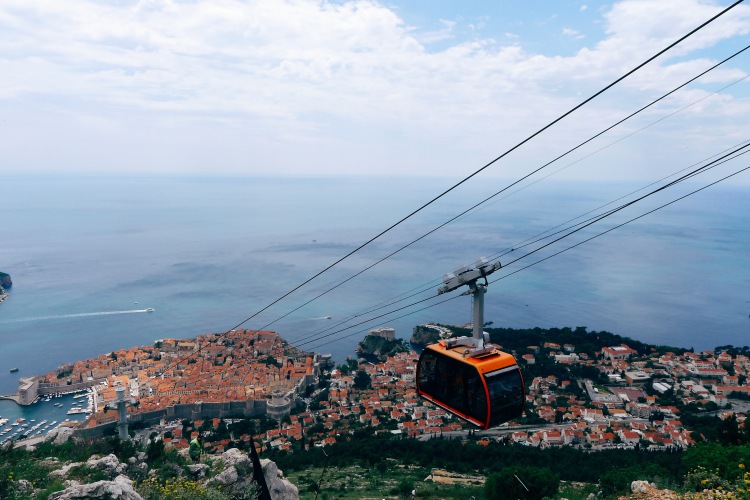 We found a less crowded area to sit and had lunch overlooking the city, our distaste for it slowly dissipating. After our hike down we realized we had more time than expected. The previous day we noticed off the main road leading from old town to Lapad there appeared to be a staircase winding down towards the sea. We decided to explore. It was very easy to find, and at the bottom was a small concrete area with a ladder leading into one of the calmer parts of the water, with stunning views  of the cliffs and sea. 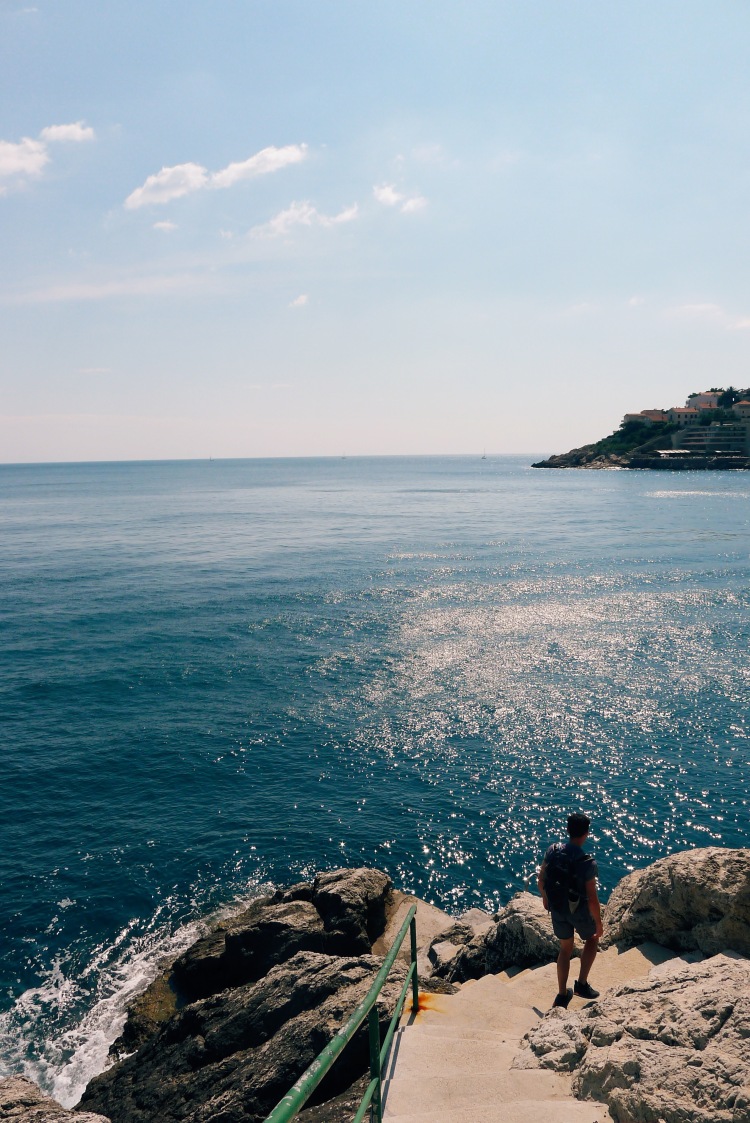 There were two other people down there. Two. This gorgeous, secluded swimming area, and none of the masses above ventured down. We were thankful. To water was still a bit crisp for swimming, but that didn’t stop us from getting in. As we were about to leave to go procure beer another American solo traveler bombed down the stairs, stripped to his swim trunks, tossed his belongings aside and asked me to take a video. I obliged and followed him with his iPhone as he propelled himself off a high ledge into the water. Alex had been eyeing the jump for the last hour, but didn’t feel confident jumping without proof it was safe. But with the evidence he needed he lit up and headed back towards the water, propelling himself into the sea several times. It was extremely fortuitous that is guy came along to pave the way. He, like us had found Dubrovnik disappointing, but enjoyed finding these just off the path locations. He was next off to Brussels, a flight he just booked, before heading down to catch waves in Morocco. We left him to finish his dives and headed back to town to pick up beer to drink on our terrace, feeling elated with how much Dubrovnik had turned around.

So while if asked for my advice I would for certain suggest skipping Dubrovnik during high (or even shoulder) season we did end up enjoying our time there. With a little effort cruise ship tourism is easily enough avoided, they have particular itineraries and time restrictions, so with a bit of planning they can be avoided. It really is a shame though, and from what we hear a major problem. So hopefully Dubrovnik can sort itself so tourists and locals alike can enjoy the city for more than a few rainy months of the year.