Getting from Jordan to Israel by land is in theory, a simple procedure. But with any land crossing, and particularly with one involving contested areas you never know exactly what to expect. We heard experiences ran from benign to horrendous. We resolved ourselves to spending the day getting from Madaba to Jerusalem if needed. From our hotel we shared a taxi to the border with a girl from Switzerland, Sophie, who was living in the West Bank learning Arabic. At the border we paid our departure tax and waited for the bus. This apparently could take anywhere from 20-minutes to two hours as it waited to fill. Luckily for us, it took 25 minutes. We were off towards Israel!

Several checkpoints and 5km later we reached the Israeli side and waited to be off loaded from the bus. From here we checked our bags through security and lined up for the first passport check, another security screening and finally the line for immigration, which again could take any amount of time. By now a few hours had passed since we left our hotel and we were feeling pretty lucky timing wise. We watched people go up and many were asked extended questions, but when it was our turn they asked us hardly anything and ushered us through to collect our bags, which were waiting for us. It went just about as smoothly as I can imagine. From our hotel to passing security in Israel it took three hours, much quicker (and incredibly cheaper) than flying. From there we traveled to Jersusalem with the same people that made up our original bus over. 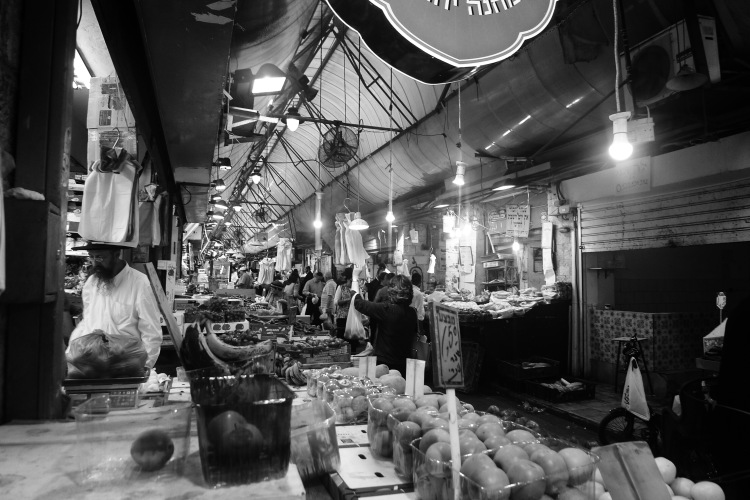 Sophie and another young traveler, a Russian-Canadian named Dimitri talked about their plans for their time is Israel. They spoke exuberantly about their travel experiences and new found ideologies so typical of travelers in the early twenties. It was endearing and eye-roll inducing. They have so much time in front of them for adventure and part of me mourned for that time in my life. I imagined back to what was really, not too long ago when perhaps I would have abandoned my plans to go explore with new friends, when I felt like I had more freedom. Not that thirty isn’t young, but I feel the slow closing of doors in my life. In many senses this is a good thing, feeling more secure and certain about who I am and what I want in life. Being 22 is exhausting. But chances to abscond to a far flung local for several months are becoming less and less realistic, at least for the time being. So I listened quietly, occasionally rolling my eyes, but ultimately reminiscing about the adventures I’ve had in this decade. And realizing how strange it is to have this path in front of me again, fairly certain in its direction. Comforting and terrifying.

In Jersulsalem we wandered. To the market for lunch at Azura, with hummus and falafel and a minced meat eggplant dish. To the bakery for rugelach. To the old city to wander inside the twisting alleyways, dodging pilgrims, tourists, and locals. In our afternoon walk we realized a lot of sites were closing, or that I couldn’t go in, having forgotten my wrap to cover my shameful shoulders. So instead we walked back to the market to try local craft beers and get an early dinner.

The next morning, shameful shoulders, arms, and legs covered we joined the line for the Dome of the Rock, passing first through the Western Wall. Security in general in the old city is always within eyesight, mostly young military touting enormous guns, a reminder of the constant conflict and contention. Though, oddly the military presence didn’t feel threatening, and most of them smiled and laughed chatting to their companions when not actively engaged in something. I had assumed I’d feel their presence as somewhat threatening, it wasn’t. But there is a tense feeling in the air, or at least, I felt there was. It was very strange to be in a place so contested, so ancient, full of such vast and complicated history. 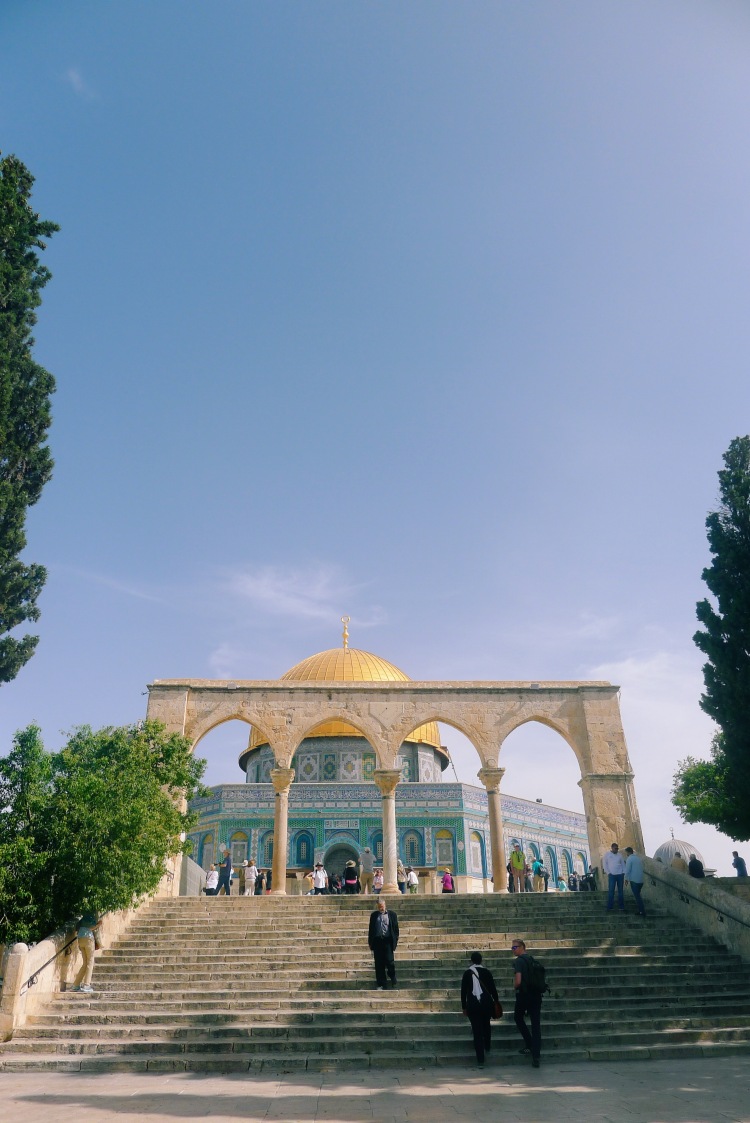 The gilded golden dome at the center of the Temple Mount is extraordinary. I still find Islamic architecture to be one of my favorite and this was no exception. Though the Church of the Holy Sepulchre was also impressive, in part due to the energy of those who believed it to be the sight of Jesus’ cruixifiction, it’s was impossible to take my eyes off the swooping inscriptions and light reflecting off the richly colored tiles of the dome. It was somewhat odd watching security guards telling people they weren’t allowed to touch in their photos I was glad we could capture the sight at all, given its great importance. I had no idea prior to coming that they Torah forbids entering the Temple Mount because of its sacredness. Even as a non-religious person, the importance of this place is palpable in the air.

We left Jerusalem for Tel Aviv, though there was much left to explore. In Tel Aviv we did what we do in most cities, we ate, found excellent cold brew iced coffee and ran (on the promenade, enjoying he sunset). Our time in Tel Aviv was mostly just a resting place before our too early flight the next day. And many people suggest avoiding it, as ultimately, it is just another big city. But the beaches are gorgeous, there’s great food, and a very unique vibe. Though much, much more cosmopolitan than Jersulsalem, the old world feel is still strong, with ramshackle haphazard shops next to prestige modern hotels. Our brief into to this Mediterranean city was very enjoyable.

36 hours is hardly enough time to spend in a country, and someday we need to return to explore more. It’s such a facinating place, with complexities neither of us can begin to pretend we understand. Dimitri had commented that he didn’t tell his parents he was in Israel, not wanting them to worry. Which seems quite extreme, but we forget the view the western media portrays of the safety in this area. Never did we feel anything but perfectly safe in both Jordan and Israel. And while cautious tendencies are a good trait, these countries are absolutely worth visiting right now. We had debated before booking our trip, and I’m so glad we decided to go. Our two weeks were incredible, and some of the most enjoyable travel I’ve had in a long time. 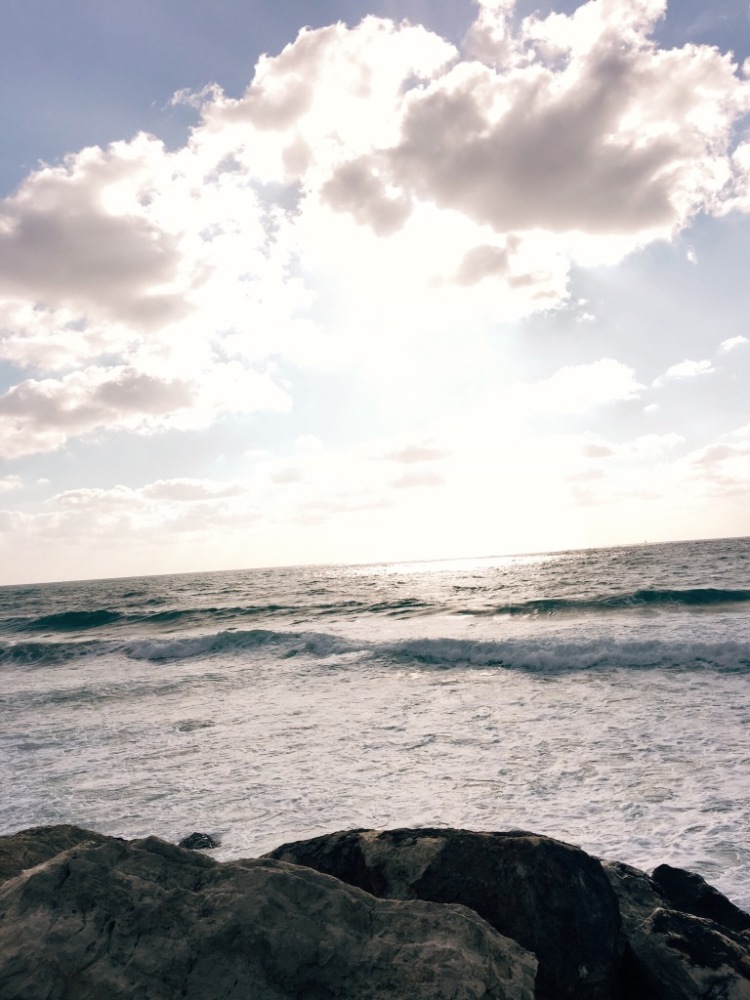