The problem with winter in Ireland, is summer in Ireland. The first year we lived here, we didn’t know about Irish summer, so the winter didn’t seem all that terrible. Which, apparently it was. It was one of the coldest winters in a long time. Though it was cold, it was never freezing, but it was long. March rolled around and the temperatures refused to climb. Last year was better, the winter temperatures general pleasant, though the light still nearly absent. The summer, our first, and only as we tend to be stateside during the summer was startling to our North American sensibilities. On the longest day in June the sun rose before 5 am and set after 11pm. For our light-starved minds it was miraculous. We joyfully used our blackout curtains for the first time, having wondered, who in Ireland could ever use these? The temperature was pleasant, generally in the 60’s (which, with the humidity feels like a perfect California 72). And then slowly, but surely as September turned to October the sun came out less often. On the shortest day it rose around 9am, and set around 4pm.  We longed desperately for the Irish summer light. 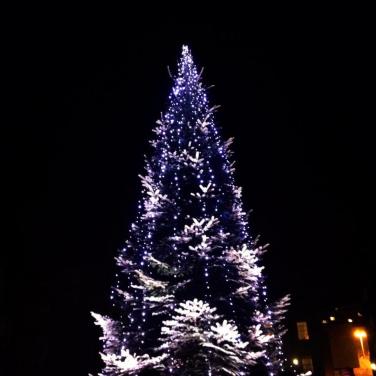 Right now, in early January, it’s 43 degrees and bright blue skies. If I were to wander outside it would feel perfectly pleasant, or freezing, depending on how the wind decided to behave. And without a car, and the mercurial nature of the weather, paired with the precious limited light, tends make one want to hibernate. And because we’re in Ireland, this would ideally take place in a cozy space with a hot whiskey. So we try to embrace the darkness as best we can. Candles with scents like feu de bois litter the apartment, filling the rooms with the smell of the woods. Our gas fireplace comes to life again, wool blankets scattered over the chairs. Curling up on the couch with tea (or a whiskey) reading becomes a coping mechanism, if it’s going to be dark, we’re going to at least be romantic about it.

And as December turns to January we watch the sunset, inch it’s way a minute or two each day towards 5pm.