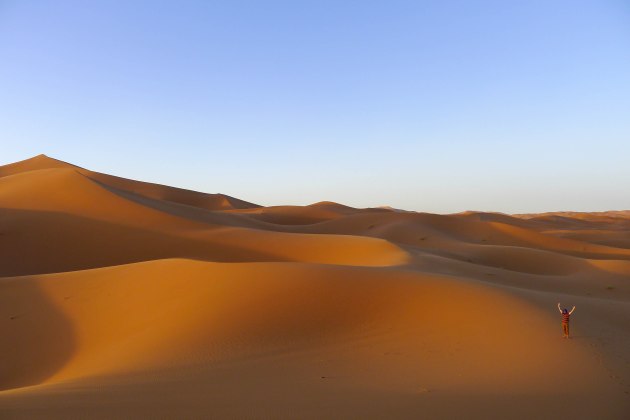 Dunes in the Sahara

It didn’t occur to me that we were traveling to the Sahara until we were already in Morocco. I knew we’d go to the desert, but I hadn’t realized it was the Sahara-for whatever reason.  I’ve never been, almost all of my travel in Africa, aside from Egypt, has been in Sub-Saharan Africa and I was excited to explore a tiny sliver of this imposing space that spans 9.4 million square kilometers. In general, the sense of mystery and exotic allure has all but faded in most of my travel-a real downside of traveling often, nothing seems out of reach, or all that mysterious anymore-at least for me. But The Sahara, such a visually evocative place. The vast expanse of unexplored, constantly shifting lands holds deep intrigue. And of course, a bit of danger. I love deserts. I love the stark forbidding landscape, the dry, oppressive heat. I think it’s built into my being at this point. There’s something about that bone-dry heat that sinks into your body that reminds me of childhood, and despite its uncomfortable nature, I adore it. I will always love to explore the desert.

The Sun over the Desert

The Sahara is unlike any desert I’ve been too. The sheer expansive nature is incredibly impressive, imposing shifting dunes expand infinitely to the horizon. The color shifts throughout the day, from pale near-white sand in the morning to deep almost-coral in the evening. When the winds come, as they do most days around 4-5pm, great currents of sand stream from the peaks of the dunes, mixing with the air, obscuring your vision. Then suddenly it stops and the desert is calm, and eerily silent, save for the occasional camel groaning in the distance as they take tourists to their personal desert camps, hidden in the valleys of the great dunes.

However excited I was to spend the night in the desert, to get out to your camp a camel is required. Similar to monkeys, I do not have the greatest relationship with camels. I’ve been on one twice before. The first in Egypt where mine spent 90% of its time lurching and trying to bite other camels while generally just being an unpleasant companion, not that I blame it, exactly, it’s hot and being forced to port tourists around. The second time was in Pushkar, India. My camel this time was less obnoxious, though it seemed wholly uninterested in following the other camels. Mostly, the trek was on hard earth, and as anyone whose ridden a camel can attest, their gate is not a particularly pleasant one. So, I didn’t have high hopes for my third venture. Rachid knew of my trepidation,  and aside from finding it quite amusing, promised he’d secure us the best camels for our trek. And he did. While Alex’s camel spent a good amount of time making odd noises and eating food that came from…somewhere? My camel was perfectly cordial. Granted, riding a camel is never a pleasant experience, but mine was a bit plump and rather amicable, or as amicable as far as camels go. I’m still not the biggest fan, and still maintain I’d generally rather walk, but this experience was not entirely unpleasant.

As we made our way to the desert camp, we stopped next to some of the taller dunes so that we could hike up and watch the sunset. Pictures never give the scale of these dunes justice, the small ripples of sand are actually quite large, and the dunes impressively difficult to summit.

Unlike most deserts I’ve explored, once the sun sets here, the heat remains. Only now, instead of beating down from the sun it seems to rise up from the surrounding dunes, releasing their stored heat. By the time we made it to camp, the final remnants of light had completely faded. We would dine by candle-light in the sand. But we only had a few hours, our guide informed us, to eat and star-gaze, because soon the moon would rise and we’d no longer be able to see the stars. As we ate, we realized we hadn’t brought a torch for trips from our tent to the fully functioning flush-toilets. I still don’t understand how this was possible, nor the running water, but the torch would prove unnecessary. Once the moon rose, something I’ve never seen before-it looked somewhat like a sunrise, though muted, and more of a white than warm, yellow light, the dunes were illuminated, the stars no longer visible. By the time we went to bed, it was still quite warm, so instead of sleeping in the tents, our guide dragged our bed-which was an actual mattress and bed frame out under the stars since we had the camp to ourselves. So we slept under the stars, in the Sahara on a slightly lop-sided bed propped in the sands of the desert. 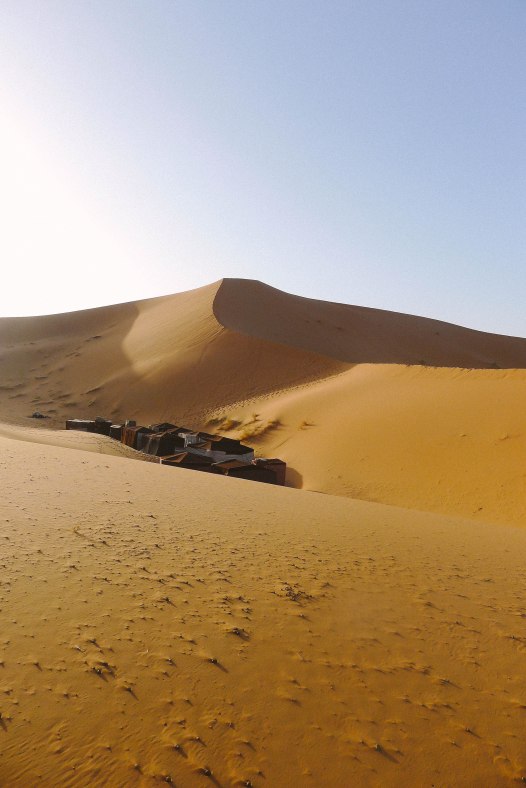 In the morning we woke early to climb another dune for the sunrise. It was cooler by now, so we relished the opportunity to wear light jackets and feel cold sand under foot. The hike to the top of the dune proved mildly arduous, as we passed more than one wheezing tourist on the accent. But the climb was worth it, to start our day peacefully watching the sun peak over the distant dunes.

For reference, those small dunes in the foreground, which appear like small mounds of sand are actually quite large, though we were standing a top a particularly large dune, dwarfing those below, they are in fact, not insignificant themselves. After some mint tea, we loaded our camels and headed back to town to explore the surrounding area. Though our time in the dunes was brief, it was easily one of the highlights of the trip. 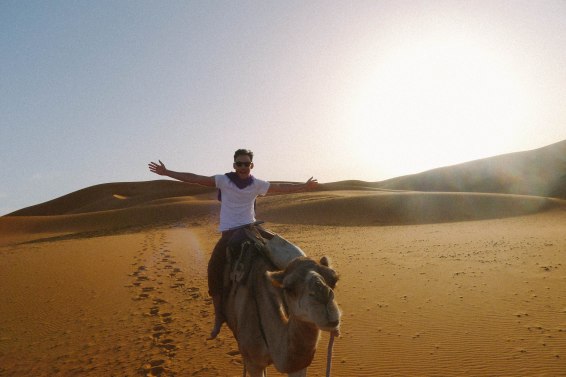