In the morning, Rachid, our driver picked us up and we began our long drive from the High Atlas towards the Sahara. The drive would take two days, broken up by an evening spent in the palm-fringed oasis of Skoura.  The scenery along route changed enough to keep interest, as we climbed to 2260m, and back down again, but much of the drive was spent talking with Rachid, whose company and conversation would end up being a major highlight of the trip. 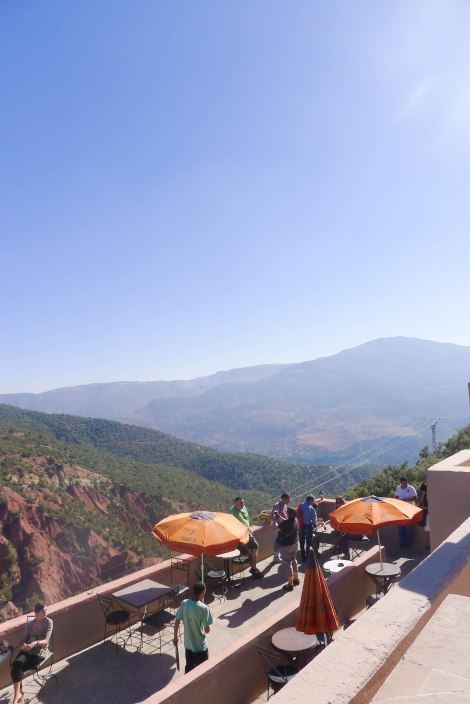 Our morning drive was a slow steady climb, on impressively maintained roads, up to Tizi-n-Tichka pass. The landscape remained a dusty mountain-scape, with the occasional green swaths of forests descending into deep gorges. The roads twisted often, assuring neither of us had any option but observe the landscape outside or talk with Rachid. As introverts, Alex and I both struggle with conversations with strangers unless we share common interest. I have, on many occasions spent an hour in our local wine shop when I was just popping in the grab something for dinner chatting with whomever was there. But, in general, I’m quite taciturn, and prefer go about my day with minimal interaction. So it was a surprise to both of us, how easy it was to talk to Rachid. We spent hours learning his version of Morocco, its culture and politics. We learned he speaks five languages, resulting a renewed desire to learn another language and stop embarrassing ourselves already. As is our custom, because we are both interested in medical care in various countries, we asked about that. As we expected, Rachid told us the private system is fine, the public, awful. The wealthy go to Europe (usually France) or the Gulf States. That doctors are not well-regulated and charge small fortunes for their services, butchers, he called them. And then I asked about women’s rights and access to health care. Rachid tells us the current King is making strides for women’s rights. I ask him about abortion, after establishing his openness for discussion. As I expected, it’s illegal. But, what I didn’t know, is that birth control is free and easy to find, at least according to Rachid. I did not expect this from a predominately Muslim country. He tells us, that when having children it is meant to be a very deliberate act, and want “the best for them.” So if you are not yet in a position to make that decision, you do not choose to have children. Life, he says, starts at conception, so that’s why abortion is illegal, but prior to that, a woman will decide what is right for her body. Of course, I have not done extensive research on women’s health in Morocco, so I cannot say how much this version aligns with the reality of access, particularly for rural or impoverished women. But it was interesting to learn, and certainly checked some of my assumptions regarding more socially prohibitive religions.

First Signs of the Desert

After lunch we continued our drive towards Skoura. En route, we saw the first glimpses of the desert landscape, though still flanked with rising mountains in the background. We stopped at Aït Benhaddou, pictured in the beginning of this post. I didn’t recognize it, though it did appear particular picturesque. Apparently, it’s the site of several scenes from various movies, including Gladiator, The Mummy, Alexander and Babel. In general, this area is used often for films, and is home to Atlas Studios. And indeed, as we drove we witnessed several film crews in the area.

We continued our drive, the horizon slowly flattening, the scenery less became green and more desolate-we were entering the desert. Finally, we arrived at our midway stop, Skoura, and it’s palm tree oasis in the middle of an otherwise stark and barren scene. We had just enough time here to settle in, read, watch the sunset and have dinner before heading to bed, another long day of driving ahead of us.