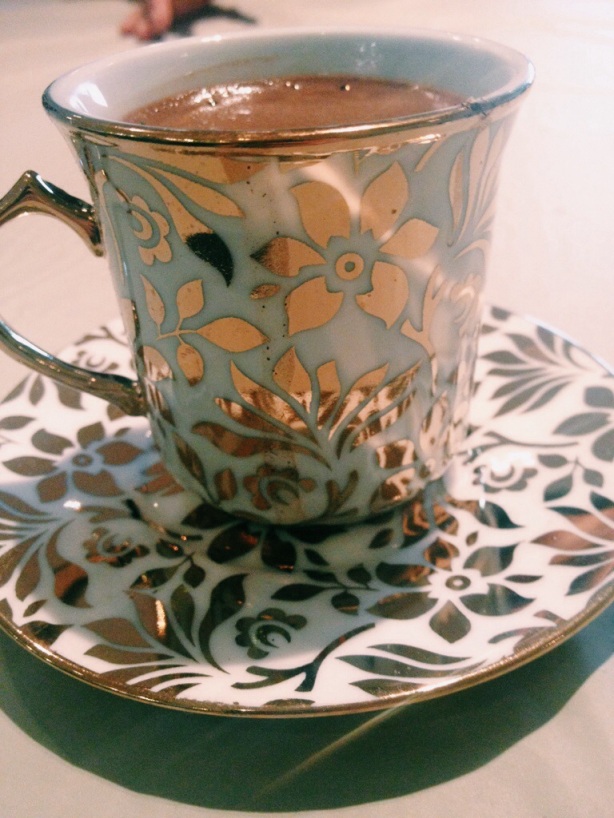 The six of us sat around the table eating dinner together. It felt odd, this little table crowded into the corner in such a vast, unadorned room with two photos leaning haphazardly against the radiator. The television was on mute in the background with music videos from the Middle East skipping in and out. I have never been a friend with someone from Saudi before, and this was the first time I had seen her without her hijab. We talked casually in class, and around town, but here in her home she was a different person, at least, to me.

As we sat after dinner sipping Turkish coffee and passing around shisha, I remarked at my relative feelings of plainness in the company of these women. Two were from Saudi, one from India, one from Korea, and then the two Americans. They chatted about the future, about their lives, so distinctly different from my own.  I sat listening, quietly, and carefully as one described how she might circumvent an arranged marriage. And then, I wrote her story in my head. I imagined her life away from here, at home. I saw reels of Polaroids of what I imagined this far off place I could never really understand. I was rapt with curiosity. I wanted to know everything about this life I would never live. About her story. I’ve long had a fascination with other people’s lives, their experiences, why they make the choices they do. As an introvert, other’s stories are a way to feel connected to the world, to be part of something larger than myself. I love the vast differences as much as the surprising similarities. It isn’t that I feel their lives are somehow more interesting, though they can be, and I’m certainly not romanticizing and ignoring the staggering difficulties these women face. But that’s just it; I cannot begin to understand their lives, and I so desperately want to. I want to understand what it means to be all variations of human existence, even though it is impossible. My understanding of my life makes it impossible to completely understand another’s. But, still, I am fascinated. And I feel lucky to be living in such an international place where I have the opportunity to meet people from all corners of the globe; it’s one of my favorite aspects of big cities.

The past month though generally uneventful-minus my thesis being accepted (yay!)- has been full of social gatherings, giving us the distinct feeling that Dublin is indeed our home. It took a year or so of being here, and though it isn’t my favorite city, it really is growing on me. A lot of this, of course, is due to the fabulous people we get to spend our time with. I’m grateful for that most of all, their presence turns the cold rainy Dublin winters into chances to gather in the warmth of a pub or home, sipping wine or whiskey and enjoying the company of our people.  As the last warmth of summer lingers, and soon will depart, I’m looking forward to fall, and for once, not feeling as strongly that familiar pang for sunnier shores. Our second September here is certainly more tame than the excitement of being newly minted expats, but it is better is so many ways.

One thought on “September in Dublin, the Second Round.”