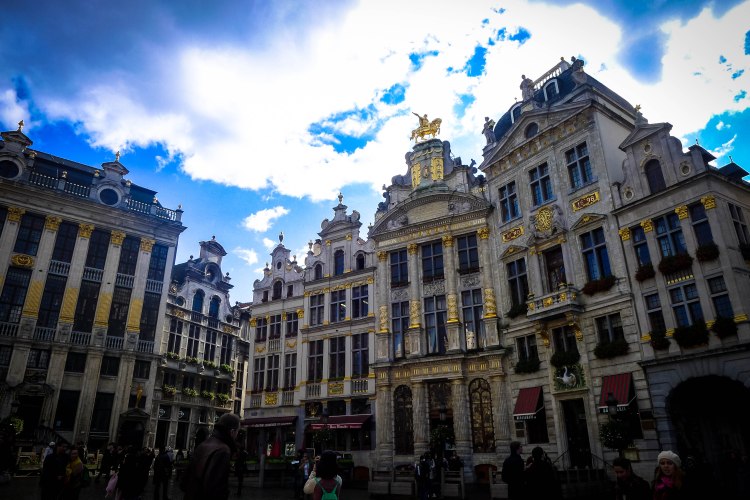 A day in Brussels, began as any ideal day might, with croissants and cappuccinos. After a leisurely breakfast the late morning found us meandering about the cobble stone streets of the historic center, sampling the plethora of chocolates available at any given street corner. Early afternoon, as the cold mixed with a creeping hunger we sought out sustenance and came across a simple outdoor restaurant, Noordzee Mer du Nord,  serving up some of the most delicious seafood we’ve had the pleasure to eat in our combined culinary history. We sipped sauvignon blanc under heat lamps at standing-only tables as we ate mussels, croquettes, fried haddock  and scallops. Well dressed couples with children out for a walk, girlfriends meeting for lunch, and tourists happily snapping photos would stop by and languidly make their way through their meals and glasses of wine. The whole scene played out as if plucked directly from my romanticized version of what all of Europe ought to be. After lunch, feeling satiated and a bit giddy from the wine we walked along Rue Antoine Dansaert to peruse the many beautifully curated shops. The afternoon fell into evening, as we sampled Belgian beers on tap at Delirium before making our way to the unmarked restaurant of Fin de Siecle where we sat at long wooden communal tables in the high ceiling, warmly lit dining room. The menu, which was all in French was scrawled on a chalk board in the center of the room. With a bit of aid, as neither of us speak French, we ordered a beef cheek chimay stew and pork ribs. Our day in Brussels was just about as ideal as a city break might hope to be. The next day was a repeat, and just as lovely as the first.

If you read much about visiting Brussels you would probably decide you wouldn’t really want to visit. Some have said the city is ugly and dangerous. Admittedly, if you wander too far from the tourist friendly area the city loses a bit of its charm and you find yourself holding your purse just a bit tighter. And I wouldn’t recommend it a place to linger long. And yes, there are limited sight-seeing opportunities. This city certainly doesn’t wow like it’s neighbor to the south, Paris. But, for a brief foray, especially for those interested primarily in culinary excursions-Brussels does not disappoint.

Living in Ireland we had yet to take advantage of our proximity to all of Europe, an area that normally lies fairly low on my travel priority list. Partly, this is because it’s relatively expensive, and partially because there are other places that intrigue me far more for their  “exotic” or” non-western” appeal. I’ve loved most cities in Europe I’ve visited, but they haven’t been nearly as memorable as say, Nepal or Vietnam. But now that we’re so close, my interest has certainly peaked, especially for Eastern Europe and the Mediterranean.  And this first re-introduction to Europe was an excellent taste for the future.