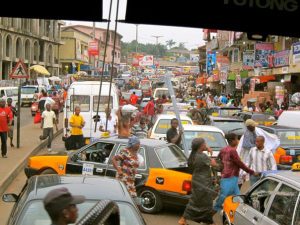 Safely, we’ve arrived at our hotel in Kumasi, and fortuitously have located an internet cafe directly beneath our hotel, which occupies the fourth-floor of a shopping complex. It’s fancy, because it has a “lift.” Backstreet Boys are playing in the background. But what’s exceptional about this hotel, aside from hot water, is the close proximity to the STC bus station, which will take us early tomorrow morning (6:30am!) to Tamale, seven hours north.

Kumasi itself is a bit anti-climatic, there’s bad traffic, but at least it’s less dusty than Accra. But still, it’s a big city, one we’re choosing not to explore given our extreme aversion to any situation that might involve traffic delay, which unfortunately, is a lot of things. Luckily, we aren’t missing much.

The drive up however, was much more scenic than the coast. Sitting in the front seat we were afforded full views of the lush green landscape. Small plants attached themselves precariously to the road bank, whipping back as we flew through, extending back beyond our focal length towards the horizon. As we drove women perched impossibly heavy loads on their heads with babies slug on their backs, bobbing sleepily in rhythm to her stride, glanced up curiously as we passed. As we continued along the road, high cliffs rose up, almost from nowhere. The scenery, while still green was certainly new; almost anachronistic. Giant leaves dominated the vegetation, dwarfing the nearby trees, vines wrapped around the base of the exposed cliffs; it felt as if dinosaur might meander into the roadway at any moment.

Foster the People provided the unusually fitting soundtrack to the drive. I felt a strong sense of calm as the warm wind poured through the car, watching the road unfold before us. Tro rides are rarely this pleasant. But it certainly was a great way to start the week.