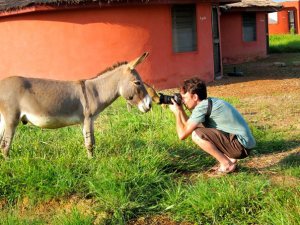 Or should I say Jama?

My biggest complaint regarding the 7 hour drive from Kumasi to Tamale of the STC bus, was it was too cold. Therefore, a fantastic trip, perhaps aside from the departure time of 7am. But, it did in fact leave on time, which by itself is an amazing feat. And not to mention, assigned seating! No mad rush equates happy travelers.

Tamale, capital of the northern region boasts a population of over 350,000, but it feels like a large town. The landscape, though slightly more arid, is actually quite similar to the coast. After leaving the forest we were greeted by true blue skies, no clouds, a first since arriving four weeks ago. There is a strong Muslim following, so along side churches are several mosques, giving the architecture a pleasant, and interesting change from Accra. Most of Accra could be defined by the juxtaposition of multi-million dollar high rises and C-class Mercedes against broken down shacks, and unfinished buildings, strangely more beautiful in their decay than the ugly, stark, newness soaring above. Tamale, however, is low-lying, though filled with the amorphous, non-nondescript store lined streets, it is much more open and relaxed, with bikes dominating the streets, not trotros.

Our hotel, however, is the true highlight. Located 5km out of town, it’s a bit difficult to get to, our taxi driver had to stop twice for directions. It’s low season, so we have the place essentially to ourselves. The main grounds are situated in a larger circle, with thatched huts serving as apartments (they call them apartments, I would say “bungalow”), the center of which lies a pool. We spent the afternoon drinking beer and reading by the pool. And then we met a friend. We’ve named him Studdly, a namesake my mother might recognize. He’s quite friendly, and took an interest in us, or rather my skirt, which he tried to eat on a few occasions. We also have far too many pictures, and although his faces weren’t nearly as hilarious as Machu Picchu Llamas, his friendliness made up for it. Not many people might understand why we were so entertained, but it was easily the highlight of the day.

Tomorrow, we head out on Safari! Reports to follow…

One thought on “Burros: The African Llama.”