Ever since I knew I wanted to have kids-which happened sometime in my late twenties-I’ve thought about what it might look like to travel with them. I always saw us as a family of four traversing some far-flung landscape. But our kids were older, maybe twelve and eight. I didn’t think as much about traveling with a baby, though I assumed we would. Until we actually had a baby I always envisioned my future family life well past the infant stage. So when it came time to pack up and head off with Wren I didn’t have many expectations. Mostly, I just hoped it wouldn’t be a disaster.

We chose Costa Rica because it’s an easy country to get to and travel around. When I was pregnant I decided it was important that her first trip be international. I wanted her to earn her wings flying somewhere exciting. I booked the trip before she was born without thinking too much about logistics. Turns out though red-eye flights are perfect with babies. It was 18 hours door to door (two flights and a 4 hour drive to Monteverde) and she handled it so well. While she slept the majority of the trip we slept almost none. We’re used to long travel days, and focusing on keeping her comfortable was a good distraction from being up for 24 hours with maybe two hours of sleep. 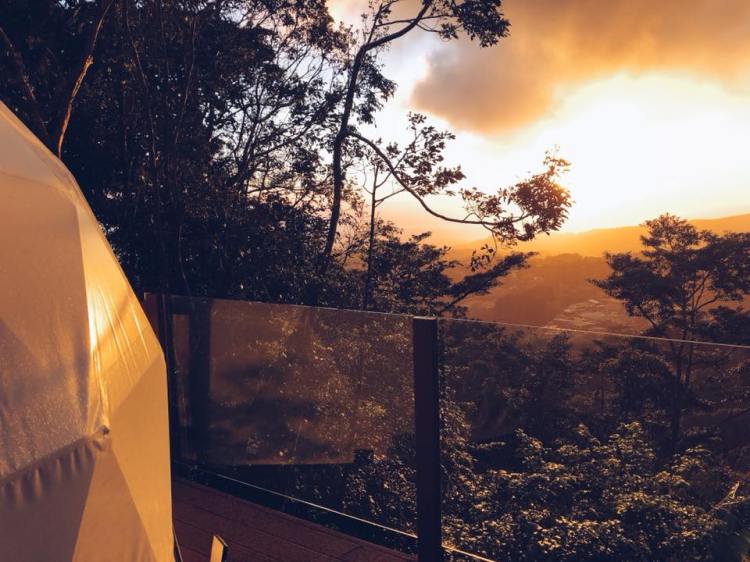 We landed in San Jose and were greeted by the familiar weight of tropical heat and humidity. Wren has never felt this before and I wonder what she is feeling. Not much I suspect, she’s asleep, again. We pick up our car and inch slowly out of the city towards the mountains. Because we are now super responsible parents we opted for the GPS to be safe (while also picking up a local sim, as usual). We did not however rent a high clearance vehicle which seemed to be “helpful” but not necessary. Eventually, after climbing up from the pacific ocean we hit the end of paved roads. I see now why the aforementioned car was suggested. But it wasn’t too bad, and Wren magically enjoyed the bumps and slept soundly. Apparently these mountain roads are in the process of being paved as you cannot currently drive to Monteverde without encountering them. And so it turned out the road we were on was closed until 5pm for construction. Faced with the option of going around or waiting we chose to wait. We spent the hour wandering around the road and showing Wren off to everyone else stuck there. Throughout the trip she would be very popular, as we’d discovered the second we boarded our first flight. Eventually the road reopened and we continued on to our glamping dome on the hillside. Right as we got there the wind picked up to a howling pace, creating the perfect white noise machine for the littlest traveler. She drifted off to bed and we ate takeaway in the outdoor kitchen while wind whipped around us. Apparently, Monteverde in very near the Continental  Divide, and at 4,000 feet of elevation, it’s known for its mercurial weather and cold snaps. Luckily all we had to contend with was wind.

We spent two days hiking in the cloud forests. Both Santa Elena and Monteverde. We decided against any tours so while we probably missed out on wildlife we had the freedom to do whatever was needed to keep Wren happy. After her morning nap (and our breakfast) we took off to hike, after about 45 minutes of her looking around she’d get tired and let the motion of our steps lull her to sleep in her carrier. I didn’t know if she would sleep, but she did so well and allowed us time to hike long. Which was lucky, the cloud forests are gorgeous, dripping saturated green from the constant moisture mixed with the ethereal feeling created by the low lying clouds. The thick forests creak with unseen wildlife and shielded us from the wind. We trudge through mud, silently taking in our surroundings while Wren dozed. I hope some part of this experience is imprinting on her. I know she won’t remember, but everything that happens in these first 1,000 days of life has a profound impact on the rest of their lives, so I hope these trips instill something for her. I hope she craves adventure and nature and tackles the world around her fearlessly.  I was an overly cautious child, and while I don’t hope she’s a daredevil I also hope she doesn’t limit her experiences in life the way I did as a child. Though I doubt there’s much we can do about that, other than to hope we can help teach her to tackle fears (with a healthy amount of respect for the fierce and unforgiving ways of nature).

We who hate being the center of attention admittedly love the attention we get with Wren. She’s a wee little one so people often guess she’s a month younger than she is. Fellow tourists and locals all stop to ask about her. We proudly show her off. Other travelers mostly tell us what we’re doing is great, saying what an incredible gift it is to a child to show them the world. Another family with a nearly two year old say this is the perfect time to start traveling with them, teaching them so that they’ll be happy, easy travelers for years to come. Their daughter he tells me, had been to Central America four times by the time she was 6-months old. I love these interactions, they strengthen my confidence that what we’re doing is indeed good for her. We also are told we are brave. We laugh, but realize how lucky we are that taking her abroad doesn’t need to be an act of bravery, she’s overall a very easy going baby as long as her needs are met. Her favorite thing is to just be out in the world observing. If ever she gets upset a simple walk and change of scenery is enough to calm her most of the time. I love this about her. I love her wide, searching, inquisitive eyes and I wonder how this glimpse of her personality will manifest itself as she gets older.

After the Monteverde we take more unpaved roads to Samara on the Pacific Coast for some beach time. We aren’t beach people, but I figured with a baby a more relaxed setting might be a good choice. And mostly, it was. But it was pretty hot so wearing her wasn’t so much an option and we had to ensure she got adequate rest in the air conditioning between activities. This was slightly more logistically challenging, but ultimately fine. We were able to take her to the beach for her first dip in the ocean, lounge by the pool and read, and stroll the beach with her at sunset.

It was, of course, a different trip than we were used to. While we are not big on tours or action-packed trips we do tend to incorporate a bit more adrenaline-fueled activities. But I didn’t really miss our old way of traveling because I know this change is temporary, she won’t always be so little. And I think a major perk to having her when we did is that we traveled so much before, we’ve had some amazing adventures and we’ve honed our travel skills well. We chose Costa Rica in part because it actually wasn’t that high on our list. We figured if it was terrible its an easy country to return to and wasn’t some destination we’d been dying to visit (like Patagonia). But it ended up being a great trip! I hope we get to continue to take her around the world as she grows, and that she wants to go on these trips. I can’t think of a better way to supplement her education than by traveling and showing her first hand what she learns in school. I hope that our lives continue to allow us to do this. I have so many dreams for our future family and a lot of them are centered around travel, and hopefully, moving abroad for a few years when she (and her potential sibling) are older. So it felt pretty amazing to kick start something I’ve been anticipating for years. And I can’t wait to see where we’ll end up over the upcoming years!