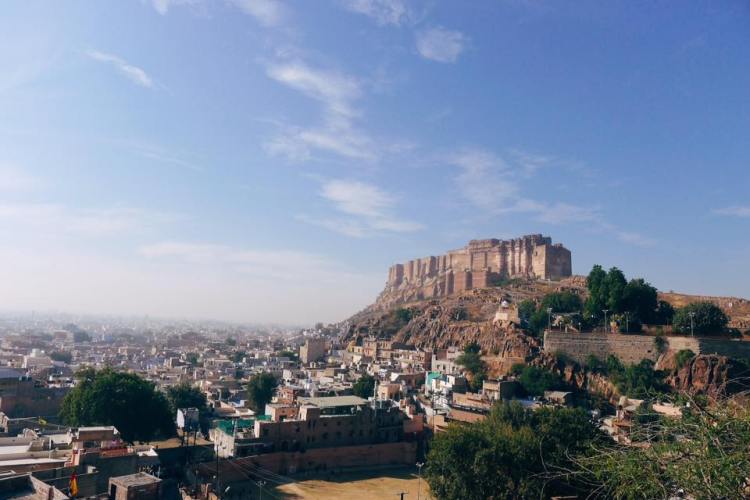 Back to the city. Last time on my tour of Rajasthan we didn’t stop in the blue city, so I was excited to explore a new part of the region. We booked in at RAAS, a boutique design hotel nestled into the shadow of the imposing 15th-century Mehrangarh Fort. It was also next to a mosque, resulting in early morning call to prayer waking up most of the hotel (thankfully, we had earplugs). Ah, back into the civilization. 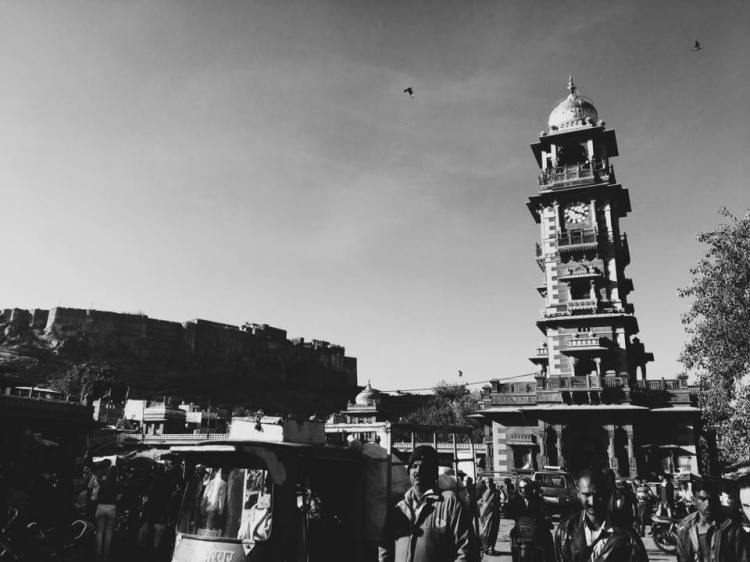 Our hotel was also located near the clocktower, and central market area, which meant walking around would be an adventure. Being in the country, and in private transport we missed being caught up in the throngs of people. Though I don’t particularly enjoy the hasslers, or lack of personal space, or occasional waft of foul air, it’s exhilarating to plunge yourself into the center of humanity going about it’s daily routine.

Feeling a tiny bit isolated due to the nature of luxury travel we were itching to get out into the city. We found a samosa vendor online, which happened to be near our hotel and went for a walk. We jostled to the front of the line, picked up a variety of samosas (for less than $1), a few sodas from across the street and headed towards a step well we’d wandered past earlier.

At the step well the four of us enjoyed our pre-dinner snack. Alex and I reminisced about our SEA backpacking trip and how much we enjoyed eating cheap street food for meals. Though it’s great to have access to any sort of food you want, being forced to being resourceful with your food options leads to more adventurous (and I’d argue often, more enjoyable meals). It means you brave the street stalls and have an incredible meal curbside in Malaysia where a little old lady dolls out the best wonton mein you’ve ever had and will talk about for years after (also, it cost $1.50). We live for moments like that, and sometimes if you have easier options available, you miss out. Not always of course, there can be balance. But in this instance we felt at home.

The main attraction in Jodhpur is of course, the fort. It’s colossal  and looms over the city. It was also never invaded. It’s impressive to be sure. We opted for the audio guide as suggested by the owner at Sujan Jawai and spent a few hours roaming around (and dodging massive tour groups the best we could). The real highlight, at least for Alex and I, was zip lining around the perimeter of the fort (another Truffle Pig suggestion). Zip lining is fun, of course, but in this case offered incredible views of both the fort and the city. 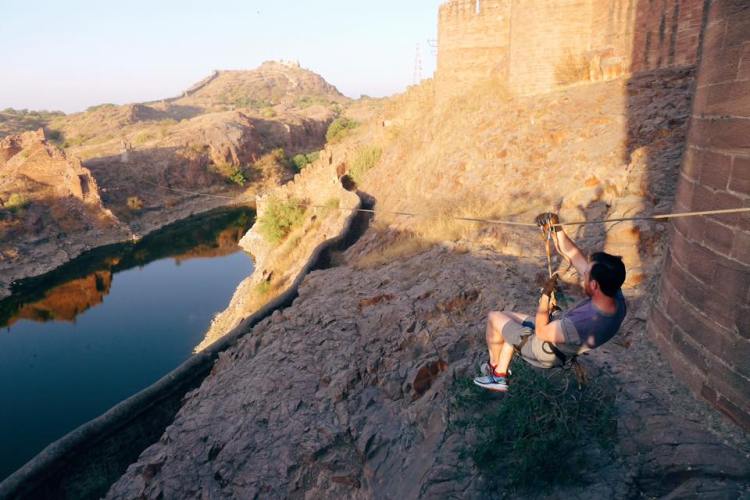 Our group was primarily Indian tourists and their families. One mother was going with her daughter and was clearly very nervous about the whole thing. He daughter (who was around ten? I’m not great at kid’s ages…) kept saying to her “mom, it’s fine really, there’s nothing to be afraid of!” It was pretty adorable. And despite some trepidation from a few of our group members, everyone made it through the course. We also chose to go near sunset so we’d finish the last line with the sun setting over the city (and of course, milder temperatures). It was truly perfectly timing, and a great way to get a unique view of the city. Jodhpur was a short but sweet visit. Next, and last, we headed to Jaipur.