My general confusion regarding the workings of a veil.

We stood together, Alex and I, in a tiny two-room bridal boutique in Dublin’s City Center. Surrounded by a wash of whites, creams, and lace-all exquisite, and all extremely expensive. Though I wanted to run my hands over the intricate details soft silks, I refrained, scared to accidentally ruin one of these sublime dresses. Brides to be twirled in front of the mirror and their friends and family as they narrowed their eyes, scrutinizing the details of the dress. It was eerily silent. It wasn’t what I expected at a bridal salon. There were no bells, or squealing, just simple nods and the occasional comment. But we weren’t there to buy a dress, I had come in after seeing a headband I liked. I had no appointment, but the women of the shop graciously invited me in to look anyway. 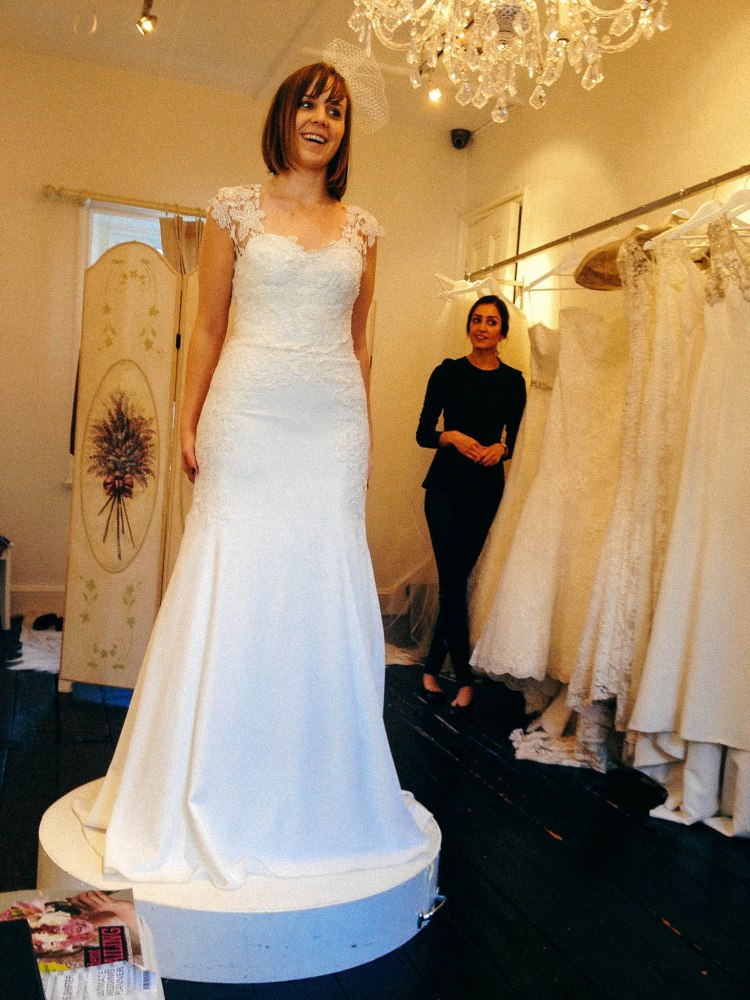 Skeptical despite $8,000 worth of pretty.

I tried on wedding dresses before, mostly because my friend’s insisted it would be fun, and perhaps they thought I would change my aversion to them. I figured it wouldn’t hurt. We drank a few glasses of wine and breezed into a high-end bridal shop, looking specifically at dresses I couldn’t afford. I figured, if I were to test my resolve the best option would be to try on something outrageously beautiful, the best. If that didn’t change my mind, nothing would. Granted, it was a risk, what if I feel in love with a $10,000 dress? Would I then be disappointed with my non-wedding dress choice? Turns out, I wasn’t. The dresses were, of course, absolutely beautiful. The whole experience was also surprisingly fun. The woman who helped was kind, quite, knowledgable and not in the least pushy. When I told her of my small backyard LA wedding she seemed generally enthused, saying small weddings were the way to go, in her opinion. And while the experience was everything I could hope for, and thankfully free of any WIC (Wedding Industrial Complex) BS I had expected, I still felt I was wearing a costume. A gorgeous costume, sure. But it didn’t feel right, I felt SO awkward. In the end, it was a fun outing with friends that strengthened my conviction that my short, blue, non-wedding dress was the perfect choice for me. Besides, I bought some seriously rad and sparkly shoes I couldn’t dream of covering up with a dress.

At the other bridal shop I spoke to the accessories designer and told her about my dress. I paused, waiting for a look of confusion, or judgement. Instead, she asked to see a picture, and immediately took my phone to show her co-worker. They both agreed, it was pretty fantastic. I exhaled in relief. She excitedly explained that while the headband wouldn’t work with those colors, but she would be happy to custom make me one, at the same price, with appropriate stones and suggested a bold, indigo birdcage veil I could try, and then ditch if I didn’t like it. She seemed delighted to help me out, telling me “you know, we get the same orders all the time, I just love being able to do something different, I’m really excited about this.” They also took no issue with Alex being there and fully engaged him in the decision-making process. Which incidentally has become my test for dealing with vendors, if they only engage me, and not Alex or say key (gag inducing) phrases that suggest it’s not an equal venture, I ditch them. One of the companies we used when finding a house sent an email to our coordinator that said “we’re certain we can find the perfect place for your bride’s special day.” RED FLAG. And truly, they ended up not being the sort of people we wanted to work with. It’s not perfect, but it has worked thus far.

Up until recently, I was wedding adverse. The whole grotesque industry in the United States, convincing people to spend an ungodly amount of money that would most certainly be better spent elsewhere, or even cause couples to start their marriage in debt was abhorrent to me. Add in the guilt women are made to feel if they don’t buy into everything WIC for their “special day,” the terrible patriarchal traditions, the non egalitarian structure, unnecessary markups, and general absurdity of it all, I just had no interest in it at all. It sounded so terrible to me, it still does. Though I hadn’t considered that perhaps we could just throw out all of the things we didn’t agree with and, together with Alex, create a wedding that fit our ideals. Which is what we decided to do once we realized eloping wasn’t for us.

I was admittedly still trepidatious. I feared dealing with vendors, with sales people, with societal expectations I would certainly fail. But that never happened, in part because we were able to seek out like-minded vendors within a network of awesome people. Through our photographer, our first booking, we found our caterer and then event planner, who specializes in small weddings. Everyone we work with is blissfully free of pressure to do anything other than what we want. All of them offered fair, and discounted prices for our small wedding. It was such a relief to be able to say things like, “yeah, we don’t want centerpieces, or much decor, or cake,” and have the response be “nope, you don’t need any of it if you don’t want it.” But a large part of why this has been relatively easy, I owe to being abroad. I don’t know if Dublin really is more relaxed in the wedding department, in fact, I would have guessed it wasn’t. And I don’t know if the fact that I’m a foreigner helps, all of the “you-must-do-this-because…society!” suggestions don’t apply to me; I’m not Irish, I’m not getting married here. So perhaps the people I’ve dealt with couldn’t make judgements on my decisions, or suggest I needed to do anything, because I wasn’t from there. I was exempt. Or perhaps, they were just in fact, the sort of people who wouldn’t judge or push anything on anyone. Maybe it’s a bit of both. Even a wedding fair, an excursion I would never make in US because they sound terrible, was also a pleasant experience.

Aside from the people though, planning a wedding from afar has been easier than we expected. We only ask opinions of people when we want them, and trust them, and because we aren’t around a slew of people to offer up advice, we get to make decisions we want. When asked back home about an aspect of the wedding we often get to say, “yep, it’s already planned” so well-meaning, but unsolicited advice has been luckily quite minimal. We also don’t have time to vacillate too much; we can’t necessarily see things in person so we just make the best decision we can and move on. Wedding planning, far from being a terrible process I feared, and god forbid you say you aren’t excited to plan a wedding in the US, has been pretty easy, and dare I say even, fun.

It’s an odd perk to being an expat that I hadn’t expected. We are far more free from general societal expectations. We don’t live in US, so we aren’t bombarded as throughly, and because we aren’t Irish we also get to opt out here. Of course, there are still many engrained expectations, and we certainly aren’t completely immune. But it is a kind of freedom, to feel each decision we make is mostly our own, and while past engrained ideals are certainly at play they feel more removed, more optional than when we lived at home. I imagine planning a wedding at home would be fine, and perhaps all my worry about the big-bad-WIC was partly unfounded, but I have to say, planning a wedding abroad has been an absolutely fantastic experience.