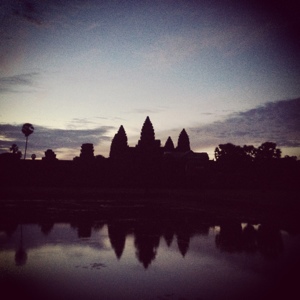 Angkor Wat. It isn’t why we came to Cambodia, but it’s certainly been on my bucket list for quite some time. We opted for a one day tour, the small tour hitting the big three. While many people suggest that three days is the minimum the truth is I get templed out pretty easily, and tend to move much more quickly than your average tourist. Don’t get me wrong, I’m super interested in ancient civilizations but I just can’t keep my attention focused that long. So one day is perfect. We had a wonderful day, starting the night before and including a 4am wake up for sunrise!

What they didn’t tell us is that because it’s summer the sun sets after it closes, so its more like great views and a lot of people. But still worthwhile. And because our pass starts the night before it was a good way to milk our tickets and see a bit more.
Angkor at Sunrise

We were warned there would be masses of people, and while there were a far amount the benefit of off season aided us again with at least, a manageable crowd. The only annoyance was a few people using flash creating a sort of timed dodging to avoid ruined pictures. But it was well worth it. Not only was the sunrise absolutely stunning, but at 5:30 when the sun was up we hurried into the temple and got to explore it basically to ourselves. Had it been packed with tourists I doubt it would have been as good of an experience. Inside is interesting certainly, but it doesn’t compare to the sunrise moments earlier.

Ta Prohm
I loved this temple for the crumbling ruins and trees overtaking human development. It has a post-apocalyptical feel that made me think of what New York would look like if humans suddenly left and nature was given time to reclaim the earth. They’re doing a fair bit of reconstruction here, which while interesting to see how it used to look I think takes away from the beauty of the decay. Again, since we explored this so early we managed to miss most of the crowds. Apparently, during peak season it is so crowded its nearly impossible to grab a picture without people in it. We didn’t even have to try.

Angkor Thom
Our last stop. Technically, there are three sites in this giant city. It used to have a population of one million back in the day, and while there’s no evidence left of the houses in which they resided the stone temples remain quite intact.
Part 1. Bayon.
Often the favorite, this temple boasts 54 faces carved into the rocks all throughout the temple. 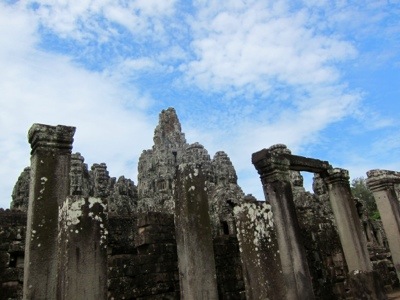 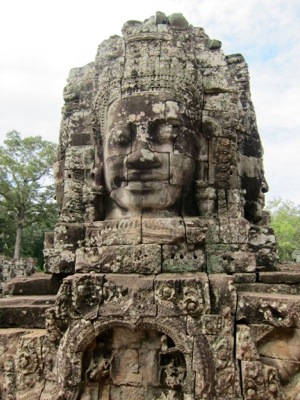 Part 2. Baphuon
I actually just circumvented this grand palace as the only other option is huffing it to the top for views we’ve already seen. Plus, as my skirt was about an inch above my knees my outfit was deemed inappropriate, for the viewing platform of this temple (the only one with any dress code). But I would trade a steep climb for the comfort of not wearing full pants in this sort of weather any day. It wasn’t that interesting, but it did have a pretty sweet entrance bridge.

Part 3. The Terrace of Elephants
Used by the king to make proclamations to his audience.

After that we wandered around a found some smaller temples hidden in the back. While they weren’t nearly as impressive as some of the others they were blissfully free of other people, making them seem like we had just stumbled through the forest and discovered them for ourselves. Certainly a highlight of the day. I can see why others advocate spending additional days at the smaller temples where the giant tour busses don’t go. 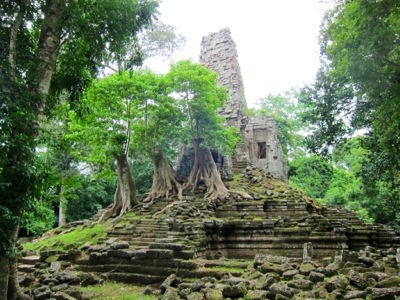 And a few other of my favorite shots of the day. 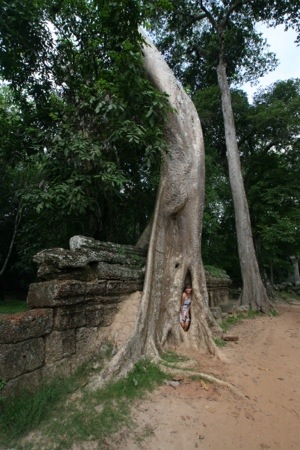 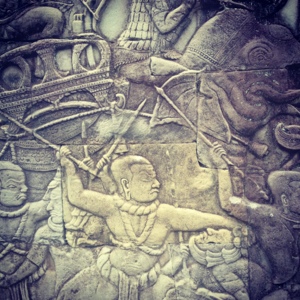 One thought on “Angkor Wat in One Day”