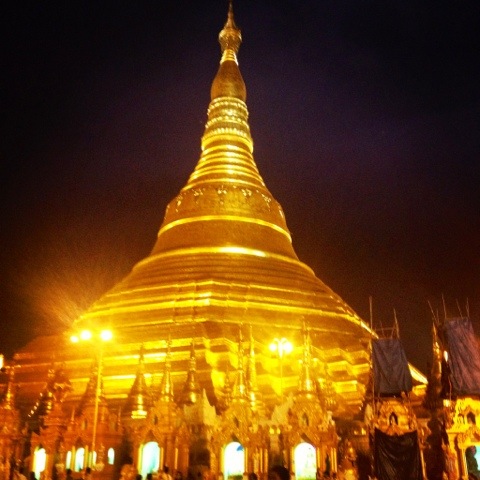 Our second to last night in Burma found us back on an overnight bus. This one did not breakdown. We almost wish it had. We arrived in Yangon at the too early/too late hour of 4am. When our previous bus broke down we arrived at a far more reasonable hour. After the most frightening taxi ride either of us had ever experienced we arrived at our hostel, where not surprisingly, our room would not be ready. We were allowed to sleep in the dorm though, and felt lucky to have found a bed in general. It was the beginning to our trip to Chiang Mai. Though Bagan is actually much closer to Chiang Mai we would have to back track through Bangkok given the uncertainty of land borders.

On our last night we watched a down pour at the Shwedagon Pagoda in Yangon. Though up until this point I’ve seen what I consider to be enough Pagodas, Stupas, and Temples to satisfy a few years I was none the less completely impressed by this golden behemoth. We went for night photography, and though we didn’t plan it the storming skies behind the lit up pagoda added a dramatic element to our shots.
That was the end for us in Burma. A brief introduction at most, it is certainly a country I’d love to come back to. And although the tourist infrastructure is nowhere near the rest of southeast Asia (many argue, this is a good thing), it was still incredibly easy for us to arrange and get around the country. We even found relatively fast wifi. It will be fascinating to see what the recent influx of tourism does, hopefully it will be a positive link for the people to the rest of the world instead of damaging.
Early the next morning we flew to Bangkok. It was strangely relieving. It felt almost like coming home. We know how to get around, where to eat, how to entertain ourselves. There’s no stress in figuring things out. We spent the day eating and shopping for groceries for our overnight train in the Paragon center, finding such novelties as cold pressed fresh passion fruit juice and nutella. I hadn’t planned on liking Bangkok so much, but it’s really been a pleasant surprise and I’m looking forward to returning after Cambodia.
The shopping center is located a few kilometers from the train station where we caught an overnight ride to Chiang Mai, which is where I’m writing from now, as we were supposed to have arrived two hours ago, and not surprisingly, are nowhere near our destination. On the plus side the trains are very clean, and second class A/C proves far superior to the Indian version. It’s not the best night sleep, but it was pleasant enough. Now to make it to Chiang Mai before lunch, because I am dying to jump right into the culinary scene!