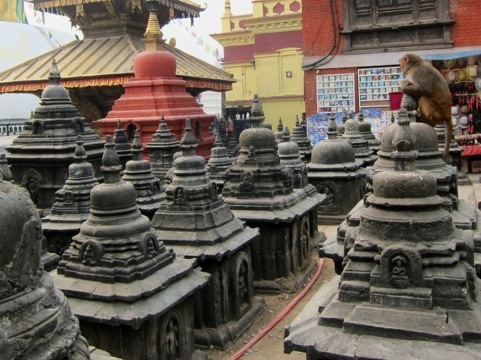 As has been the theme since arriving, I’ve been waking up absurdly early. Regardless of what time I go to bed, I’ve yet to sleep past 7am. This morning I took advantage of my wide open morning to make the walk to the Monkey Temple. Only about 20 minutes walk, and in a direct(ish) road, I managed not to get lost. Even when the map suggested there was a road, when in laity it looked more like a staircase to someone’s house. No matter, I found it! I had been admittedly reluctant to go to something with the name monkey in it, given my past history with the devious creatures, but other travelers assured me I would be just fine.

What no one did tell me (this is beginning to feel like a theme) is that the staircase to the top stupa is really steep, and really long (see pictures below). Granted, the height affords an incredible view of Kathmandu valley, or it would, if it weren’t so smoggy. The stupa itself is much like the one from yesterday, only surrounded by monkeys. The stairs up are appointed with prayer flags, burning candles, and gold statues. It was early, so few tourists were there and I was able to enjoy my area on the roof top of a restaurant that I had all to myself. The monkeys, we’re as promised totally innocent.
After turning I packed my bags and headed to the meet up hotel for the trek. I had poor directions and ended up going in circles, when I finally found a hotel that was supposedly near mine I stopped in for directions. Mistake. It was a gorgeous hotel, full of well heeled tourists. Extending to the back was a giant lush garden where families were being served high tea. No, this was most certainly NOT my hotel. Seeing families sitting together there I felt a twinge of loneliness. I hadn’t expected to see families here, but there are many, with teenagers, young children and even babies. I had never thought of Nepal as a family destination, apparently I was quite wrong!
I did eventually find my hotel, though not anything near as swanky it is nicer than my last guesthouse. My roommate Kristen iis American! From Hawaii, though currently living in Japan. And I think we’ll get along just fine. Relief. There’s only two others in the group, it’s dice loudly small (the last departure date had 10). I’m a bit disappointed, but would rather have a small group than the max size of 16.
Today is also the one week mark! It’s flown by, and though it hasn’t always been easy, and I’ve felt lonely on several occasions I am having a fantastic time (even if I’m getting more and more anxious for someone to join me). Tomorrow we drive six hours to Pokhara, and start the trek the following day. 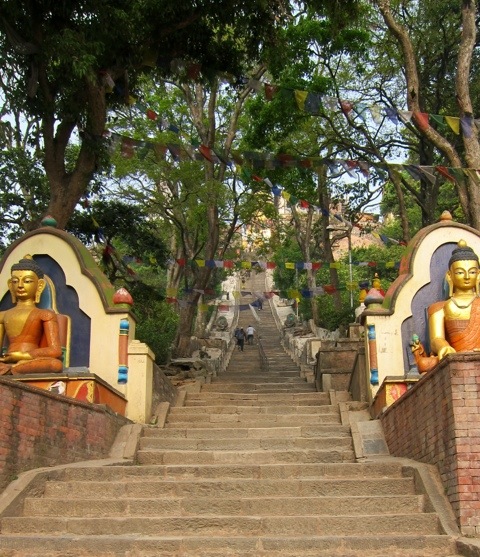