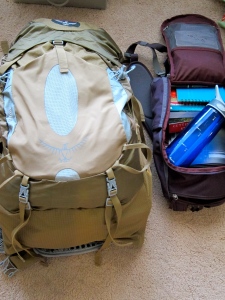 In T-10 hours we’ll be on our DC-Accra redeye. Now, we’re in D.C. on a 24 hour layover. Which, I haven’t ever done, on purpose anyway (reluctantly remembering the Atlanta stopover after Peru), and I have to admit, I really like it. A chance to regroup (and shower) before the international leg, which is a an easy eight-hour flight that I hopefully will sleep through.  So far this hasn’t felt like an absurd international trek, rather two easy flights, neither of which involve getting up early or spending 20 hours in planes/airports. I think this is a method to keep. Plus, it minimizes the probability of lost luggage, though Accra has a bit of a history with this, so we’ll see.

As it gets closer to departure any nerves I did have are slowly dissipating, followed by increased excitement. Africa, I’ve missed you, it’s been far too long. Two years in fact, since I set out on that trip that would end up changing my life. Africa was a bit like my adult right of passage, it stripped me of everything I knew as truth and made me question everything I believed in. At the end, I was more lost than I had been the entirety of my youth up to that point. And it’s taken two years to recover and begin to again find focus and direction, a better personal direction, filled with passion, not blind will for success. Despite having explored and changed my mind a dozen or so times in the past few years, I feel more sure now, even though honestly, I still have no idea exactly what it is I “want to do.” But, I’m OK with this, in fact, I’m OK if I never know, at least life will never be boring. So it seems appropriate to return to the continent that has had such a profound impact on my life. And I can’t wait to share it with someone I love.

And here we go!

One thought on “En Route: Accra”