Valley of the Moon

We keep ending up in the desert. There’s something about the rugged, stark, enormity of them that draws me back. I like places that make me feel small, and the vast emptiness of the desert does just this. Plus, unlike the jungle there are far less bugs. Or at least, you’re more likely to see them coming. We would have preferred to head south, to Patagonia. But it’s the wrong season, so instead we flew north to one of the driest places on earth: The Atacama Desert.

Normally we’d spend our time more intrepidly, hiking deep into the desert, or mountain biking, or traversing high-altitude regions. But unfortunately, all these options were not available for my 5-month pregnant self. Though I could very certainly hike double digits, it would be unclear how the altitude and heat might impact me. Luckily, there’s plenty to do that was “preggo-safe.”

We stayed in a semi-luxury airbnb glamping site a 20-minute walk outside of San Pedro de Atacama, the jumping off point for all adventures. The walk, though slightly tedious meant we had incredible volcano views from our tent (which was thankfully heated, and had a proper bed). San Pedro is a dusty town that appears to exist for the purely for tourism. Though you can easily walk the entire town in under 30-minutes there are hundreds of tour companies to chose from. We were limited to some degree by the fact that a lot of them don’t speak english, or offer english tours. Our airbnb arranged ours for us, after a bit of a struggle with communication. North American travelers are pretty rare here, so we aren’t as catered to as usual. 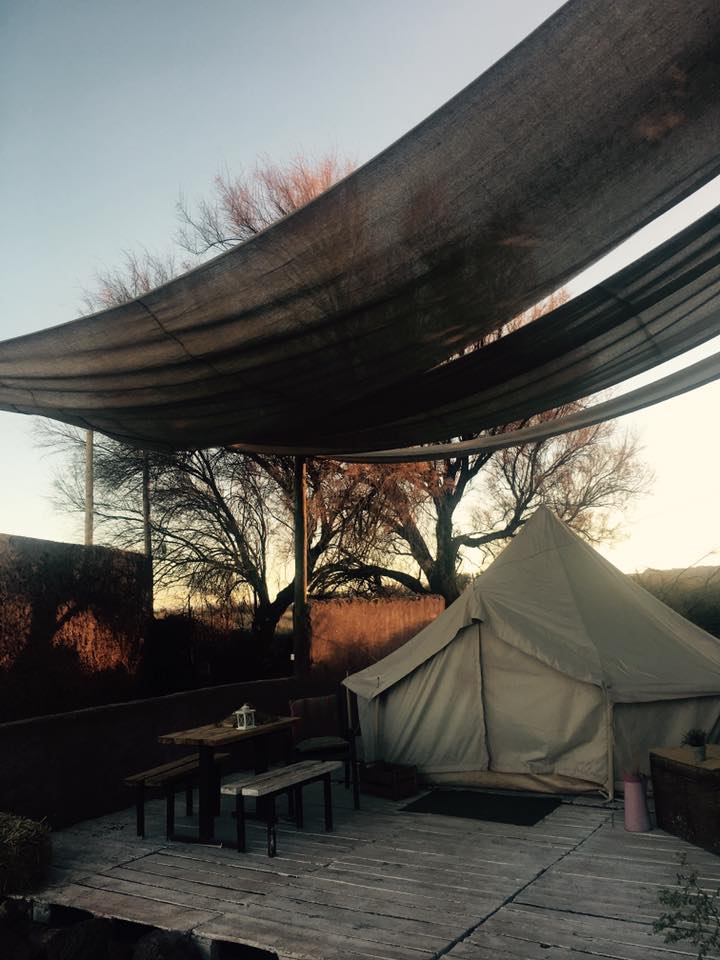 First up was Valley of the Moon. Normally this outing proves perfect for a few hours of self-guided biking. But to be safe we took a small tour group. Interestingly, 3 of the 4 women in the van were pregnant. And apparently, as a result, less intrepid. But it was worth it, our guide was excellent and did well to translate to us, the only non-Spanish speaking couple on the tour. 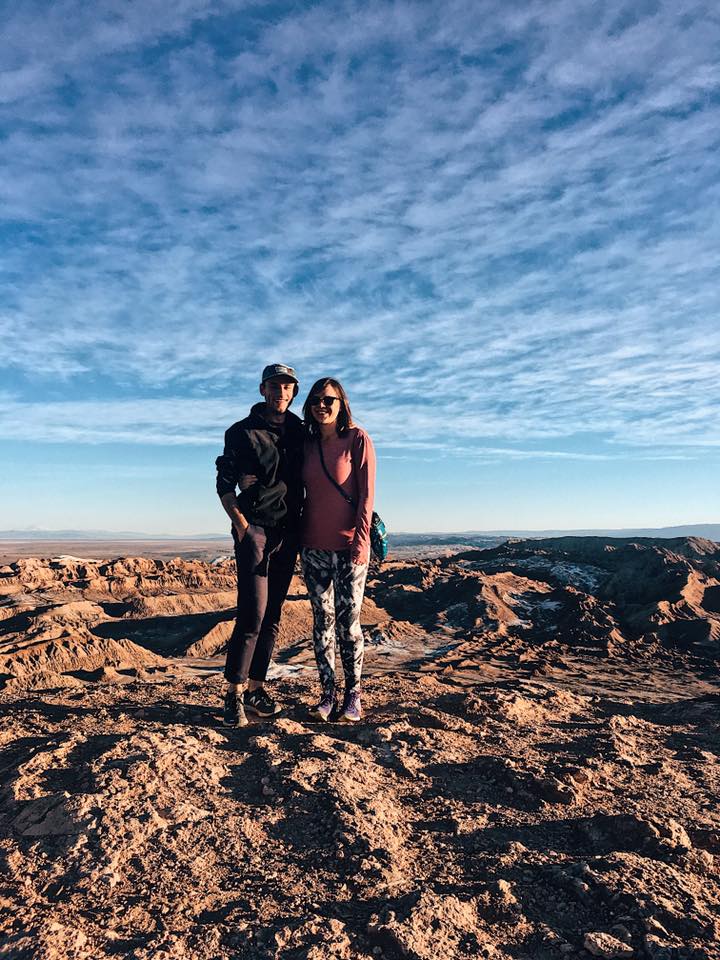 Aptly named, it is, evidently, the most lunar-like landscape on earth. NASA uses it for various simulations and testing. It is unlike any place we’ve seen. We spent the evening watching the volcanoes change color as light shifted to sunset while dangling our legs over the precipice.

Day two we head further afield. To the rainbow valley which is notable for the strangely colored mountains resulting from various sedimentation. There were also alpacas, which for us, was arguably better. South American Alpaca selfie tradition continues. They’re such a hilarious animal, we could follow them around all day.

After lunch we head to the famous salt flats in search of flamingos. There are several, though none in hordes like on Planet Earth (which filmed at a higher elevation and during mating season). But it was once again, a beautiful way to spend an evening.

Admittedly, I was struggling a bit with the tour aspect of it. We are not by nature tour people, unless it’s particularly unique or the guides are especially good. But in general we find that we’d rather explore on our own as opposed to be shown the sights. I recognize these are small concessions to make to ensure my own safety. But it still frustrated me. I don’t enjoy being pregnant, though I’ve had a remarkably easy pregnancy I dislike greatly feeling weaker or more fragile. Or less capable. Luckily I was not visibly pregnant on the trip and enjoyed going about my day generally as a regular person. Now nearing my third trimester (1 week!) that is unlikely to be my reality much longer. But I’m glad we took this trip when we did, it felt a bit like a last hurrah as our old selves. We both very much hope our kids are adventurous and love to travel. I’ll have to admit one of my future parenting fears is ending up with a homebody who would rather stay inside and read than go trekking or mountain biking. We’re crossing our fingers early exposure to nature and adventure will make the comfortable with the outdoors.

Can’t get enough of these desert vistas

We decided not to action-pack our time in the desert and ended up having some downtime. We did’t do much lazing about though. Instead we walked to and from town for food, or, in Alex’s case decided to run a timed mile at nearly 10,000 feet just to see how fast he could do it. 5:30 apparently. Because he’s a runner and personal torture is fun for us. So I paced him on a bike a checked intersections as he sped his way, gasping noisily, for a mile along a desert road, volcanoes doting the skyline for the view for his totally normal late-morning activity of choice. And now, on Strava (social media for athletes) he has a very cool map. Our definition of a fun morning might vary from your average.

We woke up at 4:30 in the near-freezing desert morning to pile into a van with other travelers to take us back to the airport. And then, we headed home. We’re still getting used to these short 10-day jaunts. They feel like they end almost immediately. But they are crucial to our mental health. Surgical residency is no joke. And short as they may be, theses vacations (particularly far away ones) shore up our mental reserves to tackle the next few months.

It also seems appropriate that my passport expires soon. This was the last international trip I’ll take with it. It’s seen me through 55 countries. From my first foray abroad solo to Tanzania back in 2009. I had no idea that one day I’d fill the passport and have to spend a day at a Cambodian US embassy adding more pages so I could get into Malaysia. My next passport I’ll be getting at the same time we apply for our baby’s. I know that passport will be special too, filled with a whole new set of memories. But I’d be lying if I didn’t admit a small sense of sadness, of the end of a pretty incredible era. We’ve been lucky beyond reason to see as much of the world as we have. It’s helped tremendously with the feeling of readiness to have a child. We’ve had more than a lifetime’s worth of adventures. Not that they’re ending by any means. But certainly the next 5 years will be quite different as our priorities adapt. Chile was the perfect location for a babymoon, though. Far, adventurous, and most importantly time together navigating a foreign country. My fondest memories of our lives together as a couple, aside from our wedding, is travel related. From eating soup and drinking beer on tiny stools in Penang to traversing mountains in Ethiopia there are so many incredible moments to reminisce about. And more, to ignite daydreams of our future adventures with our little one. We can’t wait to meet him/her!

Next up, camping and a trip to Washington to visit my family!