Petra might be the first place I’ve visited where my expectations were not only met, but blown away. Sure, the walk into the Siq and view of the treasury are impressive, but Petra is so much more than that. Most places we visit we felt we didn’t need more time. But our two days in Petra feel somewhat less than needed, though we did see a lot, there was so much left unexplored.

Our first day we walked from the visitors center through the Siq for 2km to reach the treasury. We felt like we’d stumbled upon the enterance at a very fortuitous time, we were nearly alone the entire time, granting us solitude, quite, and clear photo opportunities. Turns out, it does get crowded, very in fact, in the afternoon with the arrival of the 2 pm tour buses and their hordes. We didn’t even go particularly early, around 10am and spent our 4.5 hours exploring with hardly anyone else, until we left and had to deal with a very crowded and unpleasant Siq walk.

We decided against a guide, we had lonely planet and wanted to explore at our leisure. After the treasury we toured some of the other main attractions, like the colosseum and royal tombs. We then realized we were on a path that would wind up for an excellent view of the treasury from above. Reading about the hike some advised hiring a guide, and said it would take 2.5 hours round trip. A guide is entirely unnecessary (as are the donkeys to take you up and down), and takes less than an hour return. And the views are very worth the mild sweating to get there.

From there we made our way toward the Monestary. We didn’t really intend on seeing it on our first day, as it was rumored to be a tough hike up. But given the validity of advice we received so far (limited) we figured we could easily make it. And we absolutely did. It’s an easy hike, though the heat certainly adds an element of difficulty.

As we decened from the Monestary and headed for the enterance we wondered why we were feeling a bit tired. We’d only been out there a half day, though we did manage to see all of the main grounds and tourist highlights. Turns out, according to my phone, we’d walked 13.5 miles! Whoops. So we headed home, grabbed food, a nap, went on an evening run to get some mileage in, and ended our first day in Petra. 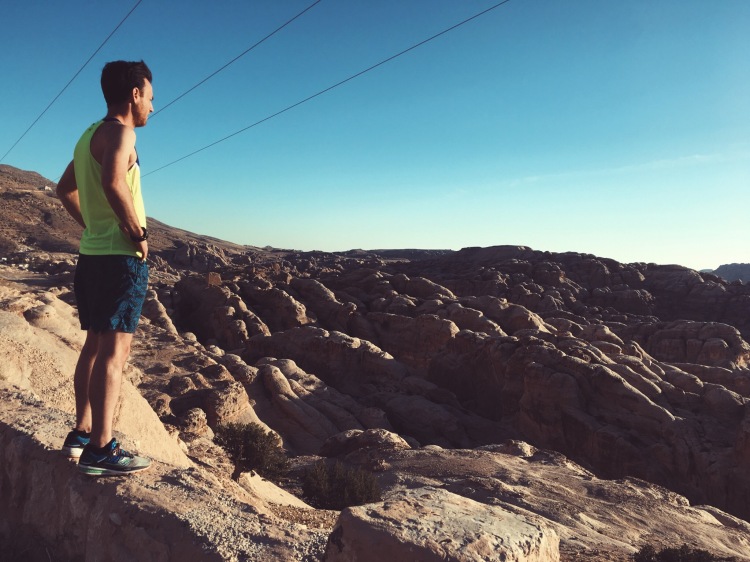 Our second day, with most of the must-sees taken care of we had a bit more flexibility with our time. We decided to hike up to the High Place of Sacrifice and take the long route down through Wadi Farasa. The place of sacrifice isn’t terribly interesting, though the climb up is great. But the hike down would prove to be one of the highlights of our time in Petra.

As soon as we rounded the corner and descended off the main trail we were alone. It’s absolutely incredible that regardless of the throngs below, a few turns from the popular routes and you’re suddenly exploring Petra on your own, or at least with only a few other intrepid travelers. And Petra is huge, you can hike in various directions for hours on end and barely cover a small portion of the site. And on these less tourists trails there are tons of interesting monuments and carved out buildings and tombs that you can just wander around. There don’t seem to be many restrictions on where you can go. And what a spectacular experience to feel like your discovering Petra on your own. You pick a trail and walk, turning or stopping when you see something interesting. Like happening on this impressive crusader fort not far off the main basin, and yet, it was empty. 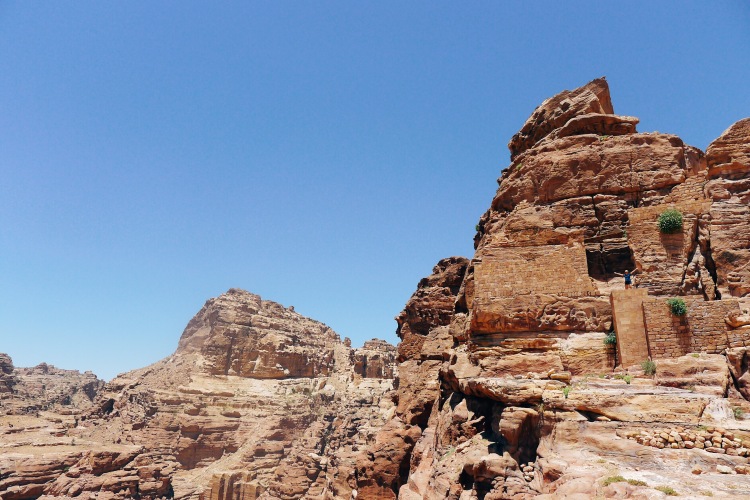 I think that visiting Petra entirely guided can yield more of an education, and if it’s private, perhaps access to things you might not have discovered on your own. But I’d hate to miss the freedom of exploration available here, it’s like nowhere else in the world in that regard. Not everyone wants to go explore of course, and many don’t make it beyond the main stage sites, being carted around by fitter animals. But, what they’re missing seems nearly tragic. And was, for us, the best part of Petra. 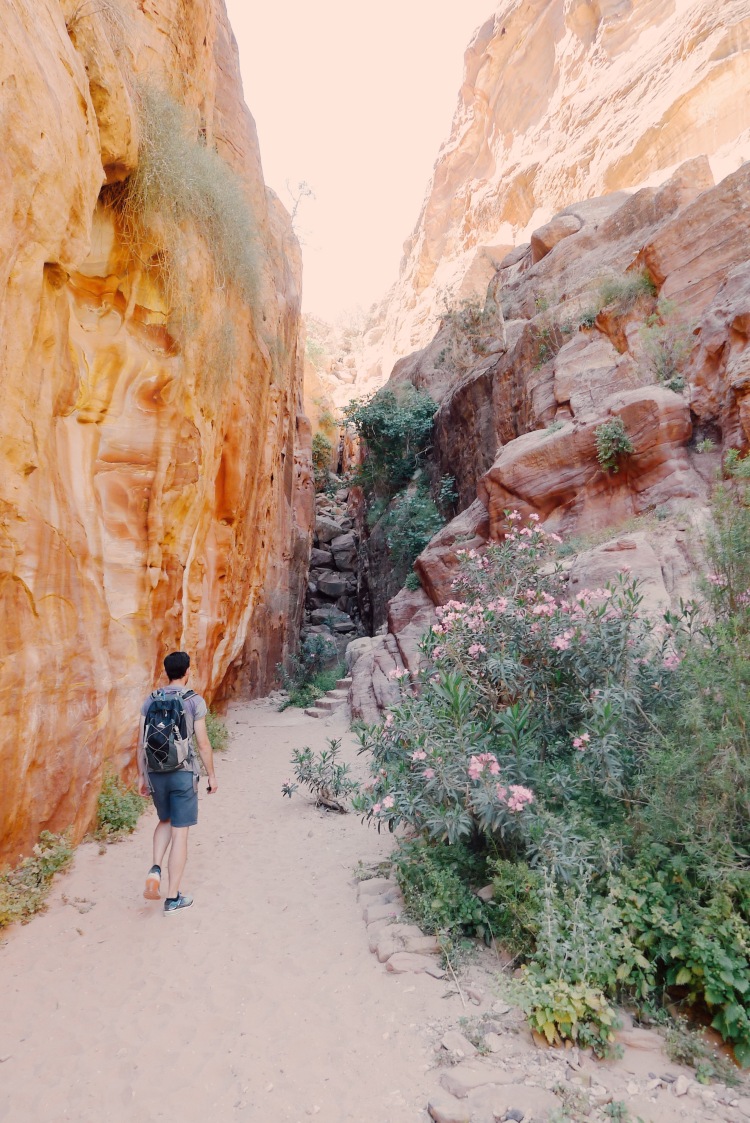 After a much more reasonable eight miles hiked we repeated the afternoon we had the day before, eating, relaxing, and running. It was hard finding a place to run here, it’s hilly and hot. But we did find a great, and only moderately hilly stretch going out of town from behind the Petra visitors center. We ran before sunset and got to see the sun setting over the trails we’d hiked earlier that day. It also became evident just how easy it would be to just hike into Petra, not that anyone should try, and there are signs expressly forbidding it. Locals seemed to be hugely amused by our running, we got waves and thumbs up from drivers and the the occasional police officer. Other white people seemed mostly very confused, as you might expect, there aren’t a lot of other people running here. Though some people run trails in Petra, and the Petra Desert Marathon is held here.

Food so far in Jordan has been great, it’s a lot of shawarma, falafel, and hummus, as well as regional and national dishes like Maklouba (chicken) and Mansaf (lamb). And it’s all so cheap! Lunch is usually $2-5 per person and dinner $6-8. Which is great because tourist activities here are super expensive. And it’s all delicious, so while you could spend a lot more on food I’m not sure why you would. There was also the time Alex ordered Arabic Shwarma and a plate with hummus, baba ganoush, falafel, a cut up Shwarma sandwich and French fries arrived. Not what we expected, but pretty delicious anyway, and it’s what the locals were ordering.

And just like that our time in Petra was over. I would have liked another day to do one of the longer 6+ hour hikes, but we have limited time in Jordan and more to explore! Next stop: Aqaba and the Red Sea.