The next two days in Marrakech involved Amine taking us all around the city. We walked for hours in the souks, to museums, and mosques. We also drove around the city visiting tombs and gardens. It was the most tourist heavy days we’ve had traveling, likely..ever. But it was great to see so much of a city and not constantly be estimating if the cost to enter something was worth it or not, since everything was included in the tour. We are pretty bad about nixing tourist activities that cost money (so pretty much all museums are out), and while generally I’d still maintain we prefer that method-exploring via other methods like wandering and eating, it was a nice change of pace. Plus, having a guide along to actually explain what we were seeing was extremely helpful.

One of the more fascinating parts of our tour was the explanation Amine gave us of what he deemed Morocco’s “hypocritical culture.” We stood outside one of the many house doors in the Medina, though the souks and market were only a few blocks away, here it was strangely silent. Amine noted this and said, these residential areas are quite, in part, because people here are very private. He pointed up to small windows on the house, which I should clarify, didn’t look like a house the way you might expect, but instead was just a continuation of a long rock wall, with a door on it.  He tells us the windows are small because people want to keep their home’s private. Even if the door opens, it leads to a hallway, you can’t actually see what it looks like inside. Instead, once you’re in, there’s a courtyard  where the light comes from. He went on to tell us that although social rules dictate very specific ways in which one acts in public, behind closed doors its more lenient. You aren’t supposed to drink, or have affairs, but once you’re in your home? It’s between you and God. Outward appearances are what matter. Take a teenager, he must sneak around to meet his girlfriend so that in public it looks acceptable. The parents know he is doing this, though he doesn’t tell them, because that’s the way it works here. In fact, they are often proud of this because the child clearly knows how to conduct himself within the cultural expectations.

A Door to a Home

Of course, we had no idea about how accurate this was. Especially regarding the modern influence prevalent in the newer areas of the city where homes and apartments are more typical. Throughout our trip however, others eluded to this sort of contradictory attitude many Moroccans hold. Personally, it sounds mostly adaptive. To function in relatively socially constricted atmosphere where people will indeed act like people, there has to be a method to deal with this. However odd it might sound. And really, a lot of people do this. They just aren’t so blatantly honest about it, which perhaps, was what was so fascinating about it.

The rest of our tour was mostly interesting visually. And so, to round out the last few days in Marrakech, I’ll leave you with pictures of the city.

We quickly learned that non-Muslims are not allowed in Mosques (for the most part, there are some exceptions) in Morocco. This is from an old French Law from when they were under “protective custody” by the French. It was, the French claimed a method of maintaining culture. A guide in Fes told us it was because of one French Solider who killed a man in a Mosque, and the law was put into effect to ensure good relations. 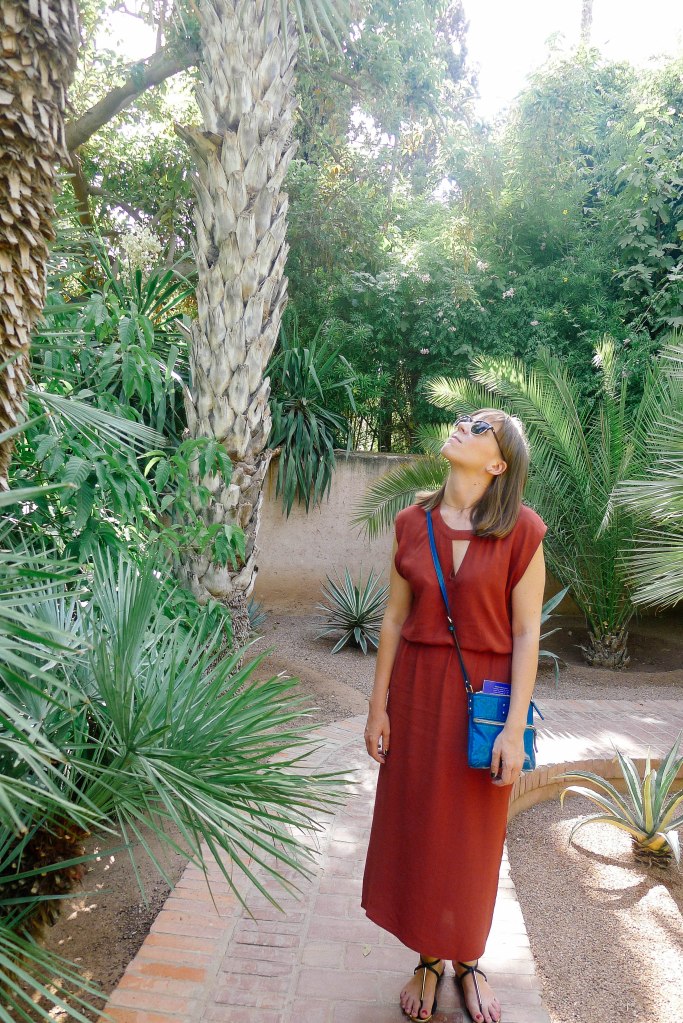 And not to forget food. Unlike our first meal in the city, the next two nights we ate at two of the best restaurants in the city, Al Fassia and Le Comptoir. Al Fassia was our introduction into Pastilla, a pastry like entree of meat and various vegetables, and a fair amount of sugar, wrapped and baked in filo dough. Pigeon is traditional, so we tried that along with a lamb tagine. Both were delicious, but the Pastilla was a definite standout.

Lamb for “two” at Le Comptoir

Le Comptoir was a whole different experience. Though it’s a mere ten minutes walk from our hotel, it’s a different world. Once you cross onto the main street that leads you to the restaurant, the vibe of the city changes dramatically. Swank clubs, high end hotels, women teetering in stilettos and the occasional Lamborghini. A far cry from the traditional part of the old city. And the restaurant itself felt like an exclusive club, they even pat you down when you enter. The inside looks like you might be in Manhattan, or LA. But the food? Delicious. We ordered far too much-a lamb dish for two (really, four) and split a bottle of wine. At 10:30 belly dancers circled the room entertaining guests. I thought this would feel touristy, and to some degree it did-but mostly it felt like what I imagine old mens clubs in the states were like “back in the day” where you might go, if you had too much money, for a drink and a steak while beautiful women galavanted around you. It was strange, but an enjoyable way to end our time in Marrakech.