We would end our trip in Munich. I had been to Munich before, but not really. I had flown on the inaugural flight from Chicago to Munich in 2005 on my way to Spain. It was my first real trip overseas.  A band played at the boarding gate which had been roped off for passengers, they were dressed in lederhosen,  there were mini sausages too. I thought it was all pretty cool. It also solidified my stereotype for Germany. Not that I really thought everyone wore lederhosen. In 2009, sitting on a beach in Zanzibar with new Norwegian and German friends, after it was established that I, as an assumed ignorant American, did in fact know where Germany was located, was told I absolutely must visit. But not to worry too much, southern Germans, like them, were nice. It was those awful northern Germans I needed to avoid. I had never heard this stereotype before, and while I certainly didn’t believe in its entirety, it did stick in my mind. And whenever I met an unpleasant Berliner, which has admittedly only happened a few times, I half jokingly chalked it up to their northernness. Munich, of course, was nothing like what I expected.

First, I took hardly any pictures. Partially, this was due to the fact that there are only so many old European buildings you can see before losing a bit of interest. And also because it reminded me so much of home, minus the language, of course. Munich, or what we saw of it, was the most cosmopolitan, moneyed city of the bunch thus far. Every other person drove a BMW, every other shop was a cute boutique. High Tea was offered at a local hotel, which is how we spent my sister’s 18th birthday. It didn’t feel all that different from San Francisco. Granted, our view of Munich was extremely limited.

Appropriately, we spent the first few days in the city making our way from shops to cafes and back again. It was a nice break from the more traditional sight-seeing we had experienced thus far, if a bit less interesting. So, everyone in Munich didn’t wear lederhosen, they did however, wear a lot of Bottega Veneta. They weren’t particularly nice either. It was confusing at first, and perhaps this is how visitors to New York feel. Thus far, most people we met were extremely friendly. Not so much in Munich. At one shop the woman was saying perfectly nice things, as I was buying a sweater, but her tone made me feel like she might be mad at me. It was just blunt, and generally lacking in emotion. This happened a few times, it wasn’t that people were mean, or rude, or really anything but friendly, but the tone of their speech made me feel like I had done something to offend them in some way. Strange, indeed. Not everyone gave this impression, of course, but it happened enough times to detect a theme.

On our third day we took a day trip. We set out on the train for Neuschwanstein Castle, two hours by train from Munich. After the plethora of city activities it was a relief to get out into the countryside. Especially with views like this from the train: 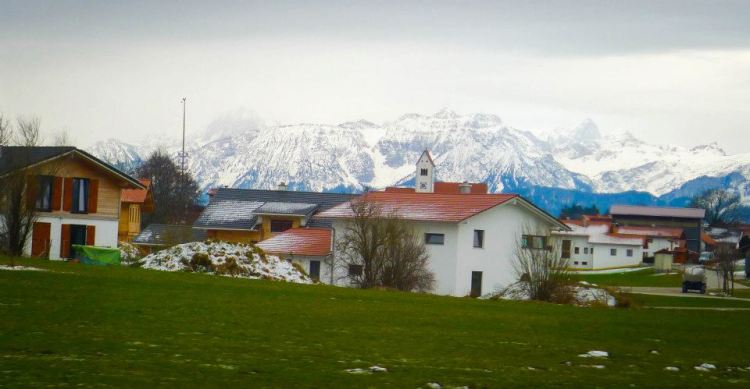 I love cities, but I love to leave them too. And this, was one of the highlights of the trip. The castle itself is stunning, and puts pretty much every other castle I’ve seen to shame. It’s the castle Disney based their Sleeping Beauty castle on, and I can see why.

Once you reach the incredibly cute town of Fussen, where I wish we had time to explore, you begin the thirty minute easy climb (or horse carriage ride, if you prefer) to the castle. Along the way, you’re greeted with great views, like this: 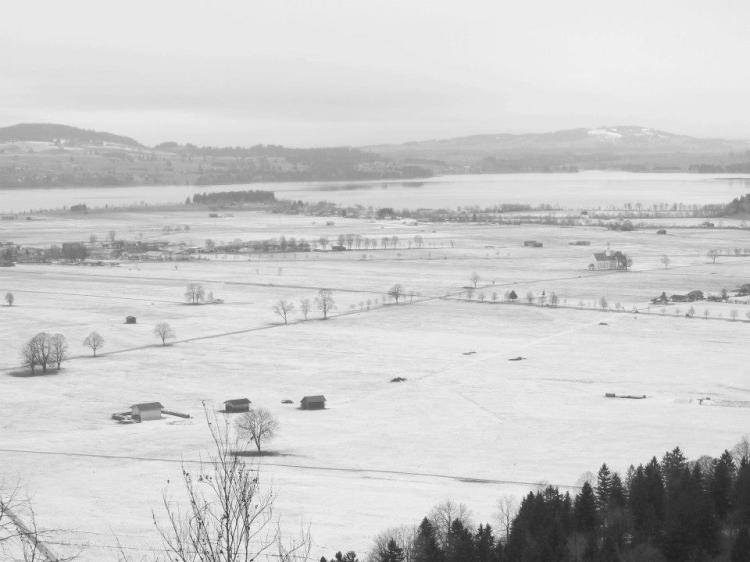 You can tour the castle, if you want. We decided not to. There was a big line, and we needed to get back before 6pm, when the last express train went to Munich. We had mostly come to hike to the bridge that looks out towards the castle anyway. All for this pretty spectacular view:

And to think, this was someone’s retreat home.

This was the perfect excursion to end our trip. And it was quite sad to pack up and head back to Dublin without my family. I’m quite aware that I’m extremely lucky in that I throughly enjoy, and look forward to spending time with my family. It’s always hard to say goodbye. As it turns out, I really needed this trip, needed to see my family. Prior to leaving I was in something of a funk. I don’t know, really what it was, but I just wasn’t feeling like myself. But getting away fixed everything. The trip “cured” me, as travel usually does, and I feel better than ever. I’m wondering if travel addiction is more literal than I had expected, perhaps I really do “need” a fix every now and then, clearly, it does wonders for my psychological wellbeing.

Our mini European vacation ended up being better than I could have hoped, and now I’ve finally explored more of Europe. And however much I didn’t want to leave I know I have much to look forward to in the coming months.

Next up? Iceland in February with stopovers in Copenhagen and Stockholm!