Despite living in Los Angeles, on and off, for the past two years, I have never actually been to Vegas. I’m not sure why, really, the amount of fantastic outdoors adventures in the area is significant. It’s probably because the city itself doesn’t hold much appeal for me. Yes, there’s great food, but there’s just as good-if not better in LA/NYC/SF, but other than that-it’s not for me. And so, at 24 (for two more weeks!) I headed to Las Vegas, for the first time.

We didn’t actually mean to go. We wanted to go camping in Mojave. Problem: no camping gear. We figured we would rent, but turns out that’s pretty expensive too (even with memberships). We really need to invest in some, you know, when we actually settle down somewhere-which will be…eventually? Anyway, turns out staying the night in a hotel off the strip is much cheaper, plus very close to Red Rock Canyon, where we wanted to go anyway.

The drive over was, desolate. But beautiful. I love desert landscapes. Something about the harsh, stark, barren nature I find particularly stunning, especially against super saturated blue skies. 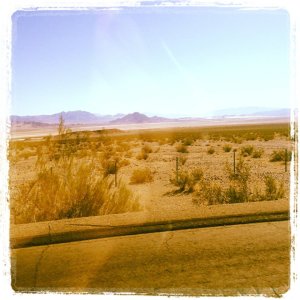 In Vegas, we did wander down to the strip, while not particularly interested in gambling; Alex bet $2 before getting bored at Mandalay, we figured we ought to see it. After confusing a valet when asking about validation, wait…it’s free?? We ate lunch at Burger Bar (of Hubert Keller’s Fleur de Lys). The general feel of the strip is not what I expected, much like Times Square there are the hordes of tourists and glaring neon lights. What it lacked was any semblance of realism. Times Square, Hollywood as well, doesn’t suggest that it exists simply for tourism. Vegas felt to me, entirely empty, despite the thousands of people wandering around.  Everything from behemoth billboards, flash, and general absurdity  it seemed as if the whole city were temporary and insignificant.  The superficial nature of the whole thing was off-putting (this from someone who lives in Los Angeles). I don’t really get why people go, not really. But, we weren’t there for lines, covers, and pictures (drink in hand) in front of the fountain anyway. We did however, after wandering into the Arts district, find normalcy. At a local market, we were recommended a “hidden bar” (Lady Silvia) and a suggestion to try the Freemont district (which we unfortunately didn’t have time for) -a bit more in line with our interests, Las Vegas regained a bit in my book.

After our late afternoon over-stimulation we took a drive out to the hills surrounding the city to watch the sunset. It was intense, and beautiful in the way only desert sunsets can be. A perfect way to recover from the day. After hot soya milk and bo bun hue at a local Vietnamese place in Chinatown and headed in for the night. 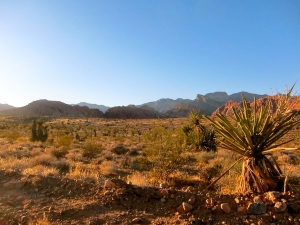 The next morning we headed 15 miles west of Vegas to Red Rock Canyon. The namesake is due to oxidation (rust) forming nearing 250 million years ago when tectonic plates forced the earth’s crust to rise out of water. We took the 13 mile scenic drive stopping to climb and hike.

"Waterfall" in the Desert

It ended up being a fantastic two-day trip, and given that our days in southern CA are numbered, I’m glad we got the opportunity to go.